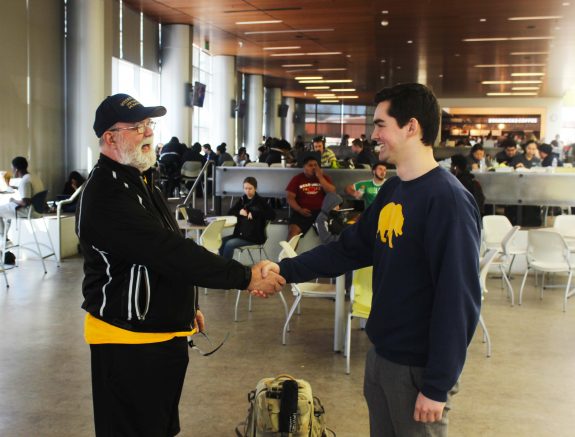 Age discrimination may be impossible to prevent, but with some changes in our own behavior, it may be possible to reduce. On American River College’s campus, and in general society, older generations are sometimes looked down upon. Instead, we should look up to those who are older.

The older students at ARC should be more respected, because they have more life experiences compared to the younger students.

Miller, 77, has taught at ARC for over nine years and says he has no plans of retiring.

“We live in a youth-oriented culture and age discrimination is a fact of life, when it comes to looking for work, older people usually are the first to be rejected because they’re too old and younger generations don’t have faith in them,” Miller said. “But no one seems to see the experience older people can bring to the table.”

Sarah Jane Johnson-Ford, who is an older student at ARC, shared her opinion on students younger than her lacking manners.

“There are rude kids who don’t say “excuse me”, and I’m a part of the generation where we were raised to say “excuse me”, and the millennials act like they can’t learn anything from us.” she said.“Baby boomers are retiring in this day and are going back to school to obtain new skills and they should be treated with respect regardless of their age.”

Just because the younger generation can potentially outdrink the older generation throughout the college years, it doesn’t mean they need to divide themselves from one another when they could actually learn from each other.

And some younger students say they respect what they can learn from older students.

“Everybody has their right to go to college since we are all here for an education, but it’s up to the person themselves if they want to respect someone or not and there are people out there who need to know that,.” Nathanial Glenn, a 20-year-old computer engineering major explained.