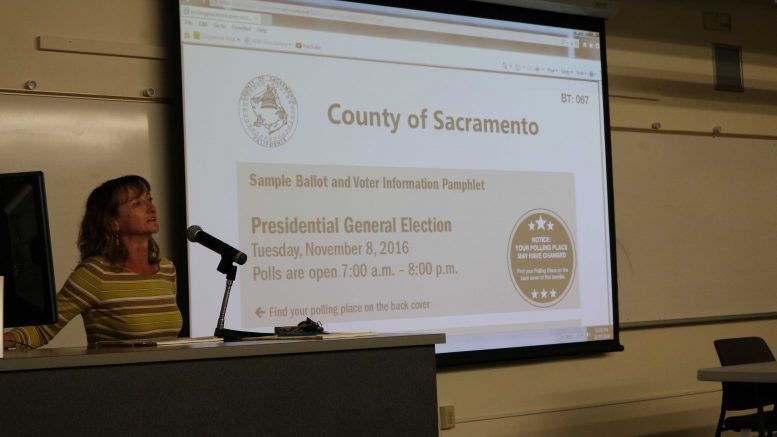 Tressa Tabares shows her sample ballot for the upcoming Nov. 8 election in Raef Hall on Oct. 27, 2016. (photo by: Cierra Quintana)

As this election season comes to a close, ARC hosted a college hour titled “Gear Up for the Presidential Election,” educating students on the statewide propositions and what exactly is on the ballot on November 8.

The presentation began with political science professor Tressa Tabares telling students what is exactly on the ballot.

“Your ballot is dependent on which county you live in,” Tabares said.

The local offices and measures that may be on your ballot are dependent on the county and or school district in which you live in.

“The information pamphlet is dependent on where you live. My sample ballot is over 100 pages long, because it comes in three different languages,” Tabares said.

You must be a registered voter to be able to cast a vote. Oct. 24 was the last day to register to vote.

“You want to be able to already know what to expect when you go to the polling place. It’s important to know your ballot,” Tabares said.

It’s important to make informed decisions, but you do not have to mark your entire ballot and it will still be valid.

“You need to know where your polling is and this information can be found in your sample ballot,” Tabares said.

If your name is not found on the list at the polling place, you are given provisional ballot and your vote will be counted.

“Everyone thinks that the presidential election is the most important, but all elections are important,” said Cindi Unmack, ARC professor.

The presidential nominees are focusing on states in which the election is very close, unlike California which is a predominantly blue state.

In the 2012 election, Silver correctly guessed all fifty states.

“Every survey polls different people during different times, so the results can be very skewed. But we notice more accurate predictions when the election gets closer and closer,” said Unmack

The “battle” to control the U.S. senate is dependent on how many seats the two parties can defend.

It’s important to make informed votes. Relying strictly on the news can can cause voters to not fully understand everything on their ballot because news networks can be very biased.

Its essential that voters go out and find credible information to support their choices.

“A good website to check out to find how much money candidates are raising and how much the election is costing is opensecrets.org. This website also shows what companies can influence the voters which voters should be aware of,” Unmack said.

How these laws are enforced are dependent on your polling place, but taking selfies at the polling place or taking pictures of your ballot is not allowed.

This can be very influential if posted online and your ballot has the potential to not be counted.

Also certain types of clothing is not allowed at the police place.

For example, voters can’t wear hats that say “Make America Great Again” on them within 25 feet of the polling place because this can be considered very influential to other voters.

Those volunteering at the polling place can ask you to  leave if you do not abide by the rules.

These volunteers often have more power than people know. They are volunteers but they are working for the county.