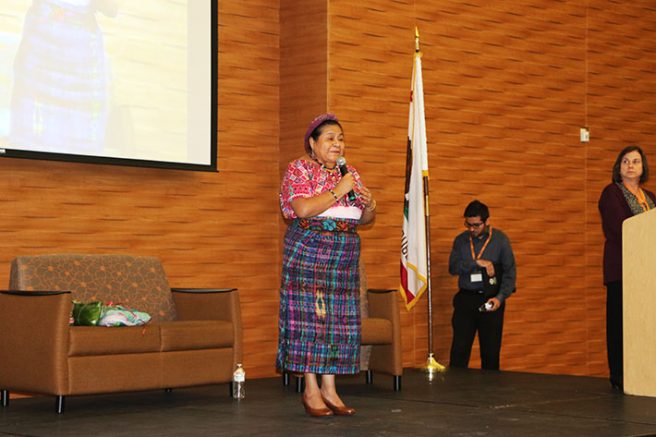 Nobel Peace Prize winner Rigoberta Menchu speaks at American River College in the Cafeteria on Oct. 3. The event only allowed students and faculty, as well as invited guests, who had made a reservation attend.(Photo by John Ennis)

Nobel Peace Prize winner Rigoberta Menchú spoke to students and educators in the nearly full cafeteria of American River College on Monday night where she discussed the spiritual, material and social health of our species through metaphorical language and the overarching themes of social justice and liberation.

Menchu, best known for her autobiographical novel, “I, Rigoberta Menchú,” is a Guatemalan indigenous k’iche’ woman who has established herself at the forefront of social and political change on an international level.

Before Menchú took the podium there was a special ceremony on stage as a native came out in a bearskin and a ritual was performed with song and prayer.

The bear was brought out to bless the audience members and it was also intended for them to acknowledge the bear and give them (the bears) blessing.

“There is a calendar for a science that makes it possible for a human being to be complete,” Menchu said to begin her speech. “That’s why none of us is different from anyone else on the planet.”

She went on to stress that the human species is the most vulnerable of all species on the planet and because of this vulnerability she said that there are three dimensions that we have to take care of, “Spiritual health, material health and social health.”

“If these three dimensions are not taken care of there will be spiritual misery, material misery and social misery,” said Menchú.

Menchú continued to explain how spiritual, material and social decadence is destroying us.

“We impoverish ourselves in our material life,” said Menchu. “Why … why are human beings not happy after they remove petroleum, gold and other precious gems from the earth?”

Beyond recognizing how we impoverish ourselves Menchú encouraged people to focus on the right things that bring them happiness and peace.

“(It is) important for young people (that they) don’t study things that impoverish our human nature,” said Menchu. “Racism, discrimination … why people are marginalized … Allow their mind to leave (from going) permanently into colonization.”

Menchú said that through all the violence she has suffered, spiritual health is what has helped her through life.

“No one can compare to a person who’s had the sacred things in their life touched,” said Menchu. “Which is why we have spiritual health,” Menchu said.

Before the event, Dr. Rick Ramirez, professor of human and career development, stressed how important it was for ARC to have Menchú come.

“I’m excited to hear her talk about the idea that we have indigenous activists that are actually, really making an effort to take care of the Earth,” Ramirez said.

“It’s an incredible event … What we’re seeing here, this is equity,” Valle said. “Having Rigoberta Menchú here is such a tremendous step forward for our program, the Native American Resource Center, our campus. We look forward to the day when, events like this are the norm rather that the exception.”

President of the (NARC) Inessa Bartholomew said, “I’m in awe … it was way better than I expected.”

Menchú ended her speech by saying, “If you don’t know the answer to any of the questions you had when you came in here today… find them.”

Robert Hansen contributed to this article