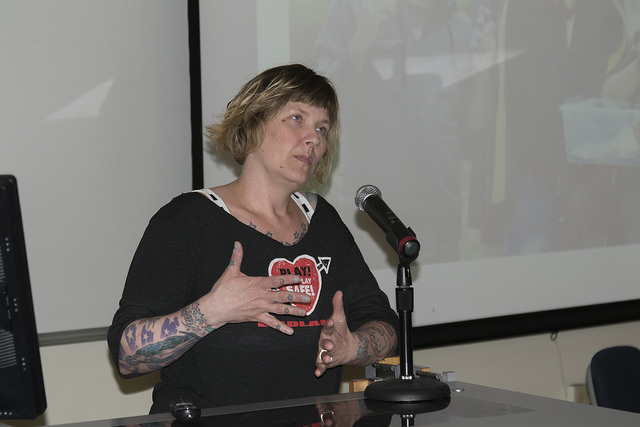 American River College hosted a discussion with Capital City AIDs fund May 5 to raise awareness of sexually transmitted diseases and prevention, as well as the experience of living with HIV/AIDs.

“HIV/AIDs is not a death sentence,” said Kristina Casper-Denman. “We have people surviving and thriving.”

One of the CCAF’s significant efforts is making free condoms accessible in the mid-Sacramento area.

Woods, who was speaking on behalf of the organization, is CCAF’s education and outreach coordinator.

According to her, the current trend of unsafe sexual activity among young adults is in danger to their health.

“If this trend continues, people age 14 to 24—bad news. (The rate of STDs) is increasing,” said Woods.

In order to educate and spread awareness, CCAF has been working with colleges like Sacramento City College, providing both resources and engaging opportunities for volunteer workers; many of whom were students.

“We have students that meet every night from Sacramento City College, and you’re always welcome to join us,” said Woods.

Woods added that the CCAF receives condoms from a manufacturer, and that they are “high quality.”

Woods emphasized that lubrication was an important part of safe sex in order to protect condoms from the possibility of breaking and, even in the case of an HIV infection, expressed optimism in the state of medical science.

“Medications are changing all the time for the better,” she said. “HIV is very smart, it’s one of the most brilliant little things. It can hide in your brain and in your organs.”

She added that “Sacramento has some amazing physicians, and we encourage people to get tested. If they get tested before there are any symptoms of the virus, it’s easier to suppress it.”

A test is recommended every two to six months for anyone that is sexually active, since the earlier that HIV is detected, the easier it is to suppress it and pursue a normal life.

“I know it’s uncomfortable talking (about AIDs), but the more we talk about it, the more we can prevent it,” Woods added.

Scott Crunchley, the outreach team leader for CCAF, also said that rates of infection were “on the rise.”

He added that education about sexual health should “absolutely” start with high school in lieu of the abstinence approach that many educators still endorse.

Opinion: Free printing would be more valuable to student success than free condoms