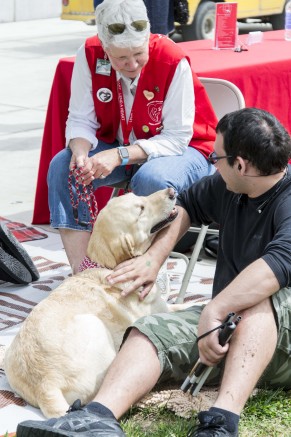 “We developed it to encourage mental health in a fun way,” said Valencia Scott, a UNITE intern and ASB vice president. “We wanted to respond to student need.”

The fair had booths with ASB members handing out finals supplies, such as blue books and scantrons, as well as a booth from Lend a Heart, a group handling therapy dogs.

The focus was on resources around campus, because finals week is approaching and that can cause a lot of stress for students, according to Alejandra Hilbert, a community intern for UNITE.

“(The fair) is really to promote the resources we have on campus and in the community,”

Many campuses bring in service dogs to assist with stress alleviation, and today ARC was no different.

“The most popular is the service dogs, because who doesn’t want to cuddle with puppies.” said Scott.

Some students feel that the service dogs could be a recurring service on campus.

“I love it … in two weeks it’s finals, and any time you’re around animals it’s relaxing,” said Michelle Talcund, a recreational therapy major at ARC. “If we did this more often, you’d make a lot more people happy.”

“We’re hosting events every day this week, and this fair again on Thursday,” said Scott.

The fair on Thursday will start at 11 a.m and have “the same resources, plus a few more,” according to Scott.
Other events being put on for Mental Health Week today and Thursday include “Yoga with UNITE” at 3 p.m. each day.