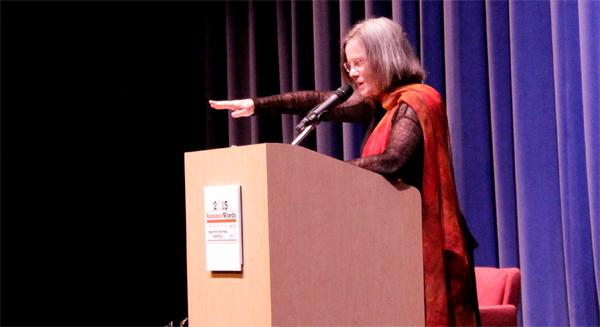 Renowned poet Carolyn Forche recites her poetry during her keynote speech at SummerWords in 2015. This year's event will take place from May 26 through May 29 and the keynote speaker will be best-selling author Luis Alberto Urrea. (File photo)

From May 26 through May 29, the American River College creative writing department will be hosting its fifth SummerWords at ARC, a community-based creative writing event featuring workshops, panel discussions and readings with award-winning, local and emerging writers.

This year’s rendition of the event will feature a keynote speech from Luis Alberto Urrea, an award-winning and best-selling author from Mexico. Previous keynote speeches have been given by renowned poet Carolyn Forche and poet laureate Philip Levine.

Spurgeon, who was one of the founders of SummerWords, said the event was created to “showcase” ARC’s “exceptional” creative writing program.

“We saw it as a way to bring more attention to the program and the campus, as well as a way to serve the broader Sacramento community,” Spurgeon said.

Spurgeon said that SummerWords is a “unique” opportunity for students to have exposure to world-class writers.

Jessica Armstrong, an ARC English major and two-time SummerWords attendee, credited the workshop with sparking her interest in becoming a writer.

“The first time I went … I didn’t really feel like I was a writer and didn’t think I was going to have a place there, but I found myself really loving it,” Armstrong said. “I loved it so much that I’m practically addicted and I’ll probably go forever.”

Allison McAdoo, also an English major, said that event was “like nothing else in the world.”

“It’s just this big community of writers, editors and people who are interested in the written and the spoken word that all come together for just talking about what we love,” McAdoo said.

McAdoo said that her favorite memory from last year was a panel on writing in an ethnic background where one of the main talking points was how the New York Times bestseller list 99 percent of the time it’s white middle-aged men.

“One of the professors said something like ‘screw the New York Times, they don’t know what they’re talking about’ and it become like our mini-theme,” McAdoo said. “We met these writers who will never be on the list and their wonderful writers who have a wonderful voice and it’s just inspiring to talk to them.”

McAdoo also pointed out that there is a very real relationship built with all of the presenters during the event.

“A lot of times the speakers won’t just leave and they’ll even attend the next workshop with you,” McAdoo said.

Armstrong described SummerWords as a place to cultivate story ideas.

“In the past I’ve generated stuff from what I learned, this time I’m going to bring stuff and see if I can interact with some of the other people attending,” Armstrong said.

Matthew Bowie, another ARC English student who’s attended SummerWords, said that at first he was “a little shaky” about what he would experience, but was “blown away” when he actually went.

Bowie added that the environment was “very comfortable” and that the whole purpose of the workshop was to “improve your skills.”

Spurgeon highlighted the affordability of the workshop compared to other similar events.

“It’s really important to us that we offer an affordable conference,” Spurgeon said. “Something equivalent to this could cost anywhere from $1,000 to $1,500 and we charge $95 to attend for the whole thing.”

Spurgeon said that the idea behind creating an low-cost conference goes in line with the community college philosophy of offering affordable services.
SummerWords has a cap of 200 participants and 30 fully funded scholarships are offered to ARC students specifically. The deadline for scholarships is Wednesday.

Life is Worth the Walk brings mental health awareness to ARC