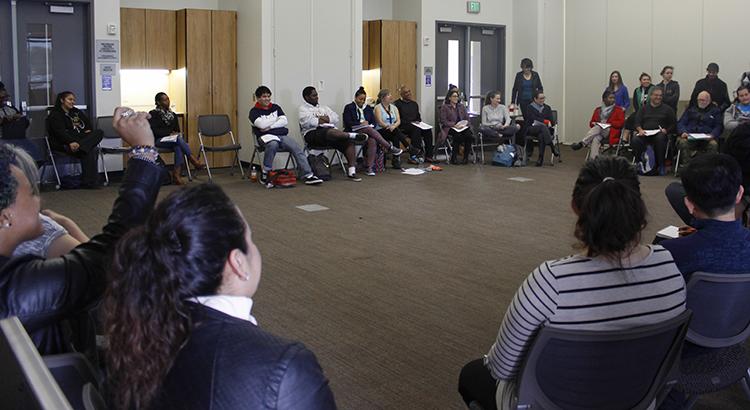 American River College hosted a Brave Space meeting organized by UNITE, where students come together and engage in a critical dialogue through conscious questioning and active listening, on Mar. 9.

The Brave Space dialogue was focused on microaggressions, which are subtle but racist comments that are meant with good intent.

UNITE representative Asher Hamilton lead the Brave Space by opening up with three comedic clips based on microaggressions.

The three clips displayed a comedic situation focusing on if blacks, Latinos, and Asians said the things white people did.

Hamilton and ARC theater student Bret Spencer warmed up the crowd by sharing their experiences first, Hamilton sharing hers a black woman and Bret as an openly gay white male.

Brave Space started off with comedy clips, but displayed an underlying tone of sincerity where the jokes were not just funny, but represented real issues each race, gender, and sexuality face.

A black ARC student, Sabrina Jones, shared her thoughts and disbelief on the microaggressions she has experienced.

“‘You’re mixed, huh? You can’t possibly be all black, you have lighter skin, and Asian type eyes.’ Things like that hurt me and make me feel pity for those who don’t think being just black is good enough,” Jones said.

James Le, an Asian-American ARC student, shared his story of being categorized as “just Chinese” as well as being gay.

“(I hear) ‘so what type of Asian are you? Oh so you’re Korean and you’re gay but you don’t look like it’ and I think “What is gay supposed to look like?” Le said.

ARC student Ashley Holly said she was half black and half Puerto Rican, and described the microaggressions she received on both sides of her race.

“‘You’re mixed because you have good hair,’ or ‘Oh, you’re Puerto Rican and you don’t speak Spanish, you’re not a real Puerto Rican then.’” Holly said.

The dialogue wasn’t limited to only race – it covered the topics of age, gender, sexuality, religion and many other microaggressions everyone in attendance had faced.

Brave Space will be hosting a project where those who want to will post their microaggression on a board, and the board will be copied and posted all over campus.

Those who want to know more information about Brave Space can attend the next meeting Tuesday at 12:15.