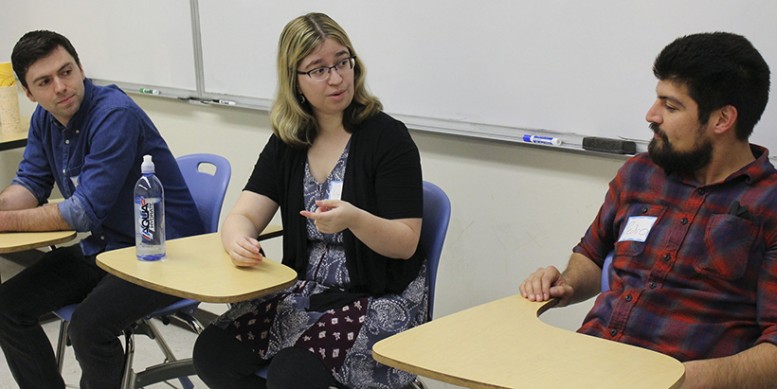 The honors club at American River College hosted a panel about the transfer experience, with three honors alumni on Feb. 18 at Davis Hall.

Kathy Rogers, coordinator of the ARC honors program, said that the goal of the first meeting of the semester was to share the alumni experience and answer questions about transferring from ARC to elite universities.

Lydia Garcia-Potter, a 2013 ARC alumnus who earned her BA in English in 2015, shared her experience at Mills College in Oakland.

Garcia-Potter said that Rogers and other faculty members recommended Mills and described it as a “very interesting and feminist experience” and said she was glad she went there.

“If wasn’t for the honors program, I wouldn’t have applied to Mills and never been there. It’s a small college, I think is one of the two women-only colleges on this coast,” Garcia-Potter said.

The biggest challenge she had at Mills College was time management while working full-time because Mills is more expensive than ARC, but there are other benefits.

“I think what was beneficial for me was the agreement with the honors program. I was able to get a lot of scholarships,” Garcia-Potter said. “They also gave me one based on my academic standing called the Dean Scholarship, and that was over $9,000 each year.”

Garcia-Potter plans to get a master to teach English at community colleges and overseas.

“I came to AR knowing that UCLA was the ultimate goal… I did pretty well on my classes and I think having the TAG program was what got me into there,” said Chase Yepez-Patterson, a BA in History on 2014 from UCLA.

Yepez-Patterson said that transferring from ARC to UCLA is a big adjustment – there are things like long lines at office hours and the quarter system.

“In like three weeks, classes started, you have a midterm… you really wish to have homework,” said Yepez-Patterson. “But once you get adjusted, it is easier.”

He said that the best thing to do before transferring is to get as many scholarships and required classes as possible.

“If you finish all your elective classes here, you can take all the cool classes later,” said Yepez-Patterson.

He also said that time management was the biggest challenge during the first quarter after transfer.

He recommends to keep it up even if you feel intimidated and overwhelmed at UCLA.

“A lot of people there are prodigy kids, they are super smart and they know like 10 instruments, but you belong there, if you are accepted, you belong there, you are just as smart as those people,” said Yepez-Patterson.

After graduating from UCLA, Yepez-Patterson went into the Disney College Program and has currently been accepted to a business program at Davis.

Pedro Reyes, who earned his bachelor in English in 2013, said that his transfer experience to Stanford was fluid thanks to his transcript and the honors program.

“I filled out half of the application and they called me. They wanted me,” said Reyes. “I was an English and Math major at ARC … I did a lot to get in there, but being Native American, veteran, honors and 4.0 GPA helped me.”

Reyes said that Stanford offers small classes, which makes it easier to build relationships with professors; but its environment is very competitive, so students have to talk with a lot of people to know what they can or cannot do.

He said that the biggest challenge was the quarter system and the diversity of classes.

“In Stanford I locked myself in the room all the time. The quarter system is a big adjustment and the diversity of classes … because you can do whatever you want. You kind of design you own major,” said Reyes.

Currently he is applying for law and businesses schools, writing poetry and doing open mics in downtown Sacramento.