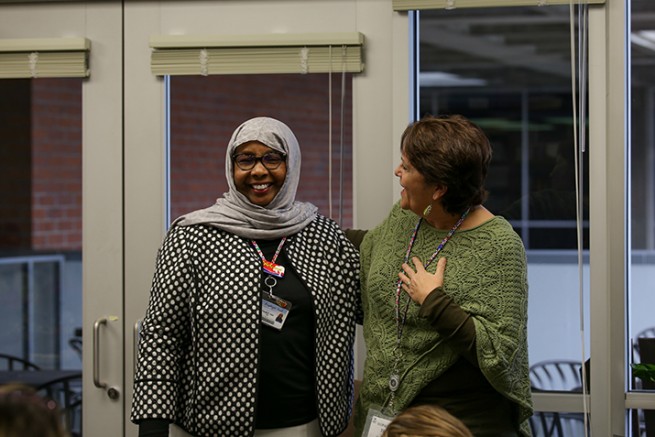 EOP and CARE coordinator Diane Delgado (right) talks about award recipient Faryal A. Said (left). Deserving teachers were presented with an award Thursday that was voted on by students at American River College. (Photo by Kyle Elsasser)

A gathering of American River College staff filled the Center for Teaching and Learning (CTL) conference room Thursday, for an award ceremony celebrating excellence on campus.

The award ceremony began with an introduction by Christina Wagner, who thanked everyone for coming and introduced the award winners.

Faryal Said, a student personnel assistant at ARC, was the first recipient to be introduced.

The article continues below 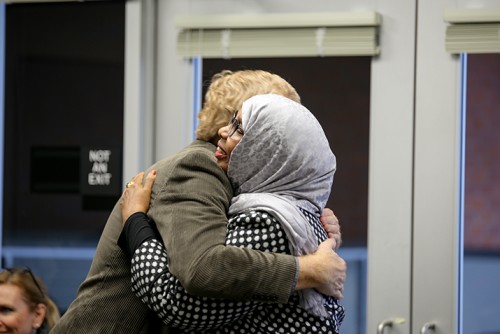 English professor John Hess (left) hugs former student turned teacher Faryal A. Said after Said received an award. Deserving teachers were presented with an award Thursday that was voted on by students at American River College. (Photo by Kyle Elsasser)

As an immigrant from Somalia, Said has had no shortage of challenges since arriving in California.

When discussing those challenges, she mentioned learning English as the greatest of them all.

“Just imagine [going to Somalia], and not knowing anything about the language or the people,” Said said, adding that language is “the key.”

Said attributed her success to her ability to communicate with and engage others, citing it as her strongest quality.

Booth expressed admiration for Bennett’s boundless energy and made note of one of her defining characteristics — her ability to go through wholesale changes every semester for the sake of creating a continually better learning environment.

Bennett, who has been an employee of ARC for 26 years, has had an overwhelmingly positive impact on the staff and students.

Booth added that he regularly received emails and had students approach him solely to praise Bennett, and even said that having her around energized him.

“The most difficult part for me has been to dial it back,” Bennett said.

Previously the administrator of a high school before joining ARC’s staff, she said that adjusting to “just being in the classroom” was difficult.

“They couldn’t contain me,” she added. “I ended up starting a lot of different programs.”

One of those programs would later become the ARC Advantage Program, for first-time students.

The program, which is oriented towards first-time college students or students returning after an extended absence, introduces them to essential college skills such as study habits and building up a support network and counts as two units upon complete of enrollment.

Be the first to comment on "ARC celebrates staff excellence"