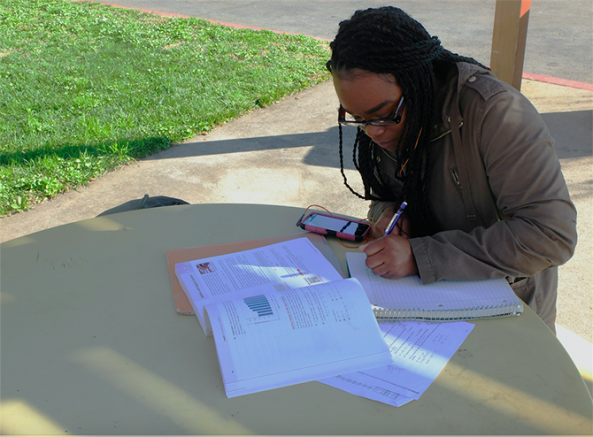 ARC student Destiny Perkins studies for her classes at the beginning of the semester. Many students have found new places to study away from the overcrowded Student Center and library. (Photo by Justina Sharp)

College isn’t just classes – sometimes students need a quiet corner to study, prompting some to branch out to other areas of the campus, beyond the Student Center and library, to find a peaceful place.

One student, Luis Tapia, said he prefers the upper floors of the library, where fewer people are located and he can focus without the distractions of other students or being at home.

“(The) second floor is, like, where I spend 75 percent of my time when I’m at school,” Tapia said. “At home the fridge is right there, you know the TV, it’s easy to get distracted.”

Tapia also said that in previous semesters he studied on the first floor, but being upstairs out on the balcony is “kind of like an escape.”

Some students have found outdoor tables around campus – near the gym and Davies Hall – to be a refuge from crowds of people.

Destiny Perkins said she prefers being outside because there’s no mass gathering spot.

“I liked (the library), but it became crowded really quick,” Perkins said. “Out here there’s light and quiet, more peace.”

Perkins added that, on the outdoor balcony of the library, birds would sometimes land on the table, which prompted her to find a different place. 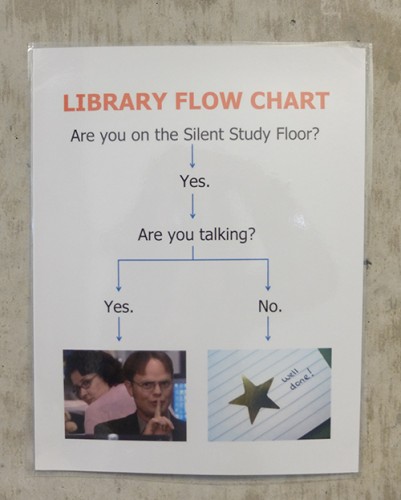 A sign in the library humorously reminds students to be quiet while in the library. Due to the noise and large crowds in places like the library and the Student Center, students have found new, more peaceful study spots.
(Photo by Justina Sharp)

Others said that, while they may not have a specific preference, they don’t mind being in the library or going to a more secluded area.

“If it’s nice outside I prefer to be outside,” said Sydney O’Brien. “I don’t get distracted very easily anyway.”

O’Brien said she is fine with “whatever’s available,” and will usually just grab a table close to her class.

Shelly Chavarria said she has no problems concentrating in the library but studies in other places, like the tables near Davies Hall, as well; she doesn’t get distracted even when there are people around.

“Nobody was screaming and yelling and acting a fool,” Chavarria said.