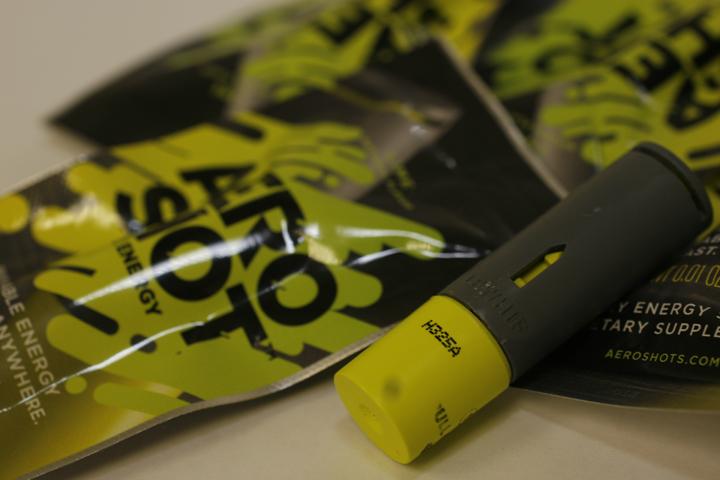 An AeroShot canister, which is the size of a lipstick holder, displayed on Feb. 29. AeroShot is a caffeine inhalant that hit stands last month on the east coast. (Photo Illustration by Daniel Romandia)

If you’re tired of waiting in line 15 minutes every morning at Starbucks for a cup of coffee, then you’re in luck because your ritualistic morning caffeine fix is about to undergo a revolution.

Introducing the AeroShot – the world’s very first caffeine inhalant. An AeroShot is a lipstick sized yellow and grey inhaler, currently being produced by Breathable Foods, Inc., that delivers a lime flavored dose of 100 milligrams mixed with B vitamins.

Developed by Dr. David Edwards, a Harvard biomedical professor, AeroShot first appeared Jan. 17 on the shelves of convenience stores throughout New York and Boston selling for $2.99.

With 120,000 tons of caffeine being globally consumed each year – caffeine is the world’s most popular psychoactive substance, according to an article written by T.R. Reid for “National Geographic Magazine.”

Where exactly is the harm in a caffeine inhalant currently categorized by the United States Food and Drug Administration as a “dietary supplement?”

On Feb. 19, New York Senator Charles Schumer filed a complaint with the FDA about the product’s safety.

“’The AeroShot caffeine inhaler is being marketed as a party enhancer; it can facilitate excessive drinking and its effects have never been examined by independent regulators to determine their impact on the human body and in combination with alcohol, especially with adolescents,’” said Schumer in an interview televised by ABC news.

Michelle Goodwin, Account Executive and Public Relations Director of the AMP Agency, defends her client Breathable Foods, Inc., in a press release that touts the AeroShot as offering “consumers a unique way to get their caffeine, as little or as much as they need when they need it. This innovative supplement is revolutionizing the way people energize their lives.”

Adding validity to Schumer’s complaint is the fact that Breathable Foods, Inc. has not conducted any clinical trials to examine the effect AeroShot has on adolescents who can legally purchase the product. Goodwin responded by confirming this, adding that the product is “perfectly safe when used as instructed.”

In an interview with dietary expert Dr. Mitchell Brooks, the physician quashed the FDA’s categorization of an AeroShot as being a dietary supplement. “They are a supplement for caffeine,” explained Brooks.

When asked about any downsides of caffeine, Brooks pointed-out that headaches and fast cardiac arrhythmia are common ailments of overusing caffeine.

“The worst is you could wind-up with a ventricular fibrillation and you could die but you’d have to take 60 to 80 of them [AeroShot] in a short period of time,” said Brooks.

Goodwin declined to comment on Brooks’ assertions and the statement made by Sen. Schumer, but was quick to note that Breathable Foods is excited to launch AeroShot nationally within the next 18-24 months.

Be the first to comment on "AeroShot inhalant new caffeine mix"