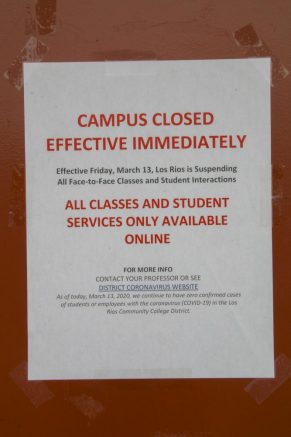 In the midst of campus closures that went into effect on March 13, students and employees voice concerns about the sudden changes instructed by the LRCCD. (Photo by Emily Mello)

As of Wednesday, March 18 all Los Rios Community College District schools will close indefinitely in an effort to contain the COVID-19 virus.

While there have been no confirmed cases of infection throughout the LRCCD, according to RAVE alerts, four medical students in the LRCCD were exposed to COVID-19, according to an email sent to students, staff and faculty.  Exposure occurs when an individual has been in contact with someone who has tested positive for the virus, while infection is when a person has been tested and confirmed to have contracted the virus.

Regardless of the status of the tests done on these students, the LRCCD should have responded to this situation sooner, as one does not need to be infected to spread the virus. Inaccurate information and a lack of clarity coming from the LRCCD, as well as the delayed response in action, makes it clear that the LRCCD is unprepared for a prolonged closure of campuses. LRCCD should learn from the problems that arise now, to better prepare if there are future campus closures.

While COVID-19 has not been confirmed on any of the Los Rios campuses, the district should have been prepared for any situation including campus shut-down, as the infection spreads quickly in highly populated areas and in close quarters, such as classrooms, cafeterias and student resource centers.

According to Scott Crow, ARC public information officer, the college is following the recommendations of the California Department of Public Health and the Sacramento County Department of Health Services to stop the spread of COVID-19.

“Please know that we are treating this situation with the highest level of urgency and responsiveness,” Crow said in an email sent to the Current. “Our team is actively in communication with public health experts and evaluating all guidance from local, state and federal officials.”

However, due to more outbreaks of the infection in the Sacramento area, and the closure of Elk Grove Unified School District on March 7, the district should have been taking much stronger preventative measures.

Starting March 13, the LRCCD cancelled all in-person classes and began the process of moving to 100% online or remote classes. However, there are still many unanswered questions of what happens next and what happens to the campus. Students may not know what will happen to the resources offered by the college, and the future of students and professors this semester is in question. While the college and district have been updating the students with information, the information is limited to what the district has done, and not what they are planning to do.

While the college may be closed the remainder of the semester as classes go online, many students and professors are left wondering what these next several weeks will look like. The confusion and lack of information coming from the college in the past week has been less than ideal.

The confusion and conflicting stories coming from the LRCCD administration on what would happen if the campus were to close is indicative of the poor response from the college, as it seems they had taken a more “wait and see what happens” approach to containing the virus. While no one on campus has tested positive for the virus, this does not mean that there are not any infections, as testing is very limited.

Had the district been more clear about the campus closures or informed professors and students more clearly on what would happen, they could be more prepared for education off of campus.  It will be especially hard to transition to an online platform for students who have learning challenges as they may require specific accommodations that may not be available immediately with the campus closure. Going online will also require getting specific materials for both students and professors. But by only giving professors and students less than a week to prepare and get materials, students may fall behind in classes.

The college’s focus should move to making sure professors are supported in making their teaching materials and classes accessible to students, so that they have the tools to help the students in this transition.

The miscommunication from the LRCCD was apparent as student employees, who are worried about their jobs, were told conflicting information about their employment status.  As of March 17 they are still employed, according to an email sent out by the ARC communications office. However earlier, on March 12, an email was sent out saying that all payments would be stopped and that student employees would be terminated. While student employees remain employed for now, the confusion and misinformation is a clear sign of the campuses unpreparedness for dealing with a campus closure.

COVID-19 has shown how unprepared American River College is in the face of a campus closure, and that if there is a next time, the campus should be more prepared to take the necessary action, with information being released as clear and true as possible, so no one involved is left with unanswered questions.