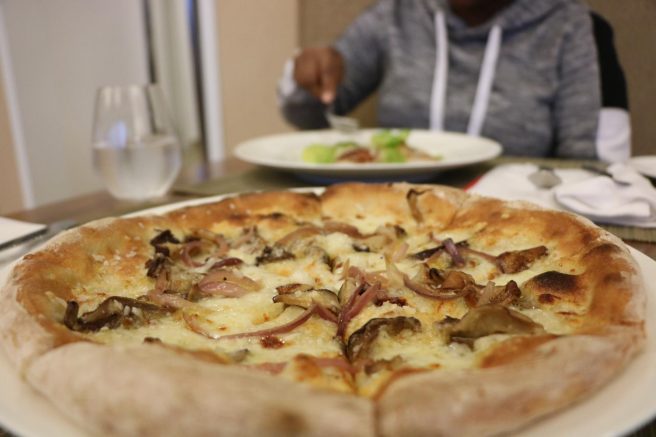 According to its website, the Oak Cafe is staffed entirely by students who rotate jobs, including host and servers, while working in the restaurant. The Oak Cafe also alternates the menu every week and has different chefs preparing meals on the menu.

The Oak Cafe allows for reservations to be made via phone or walk-in. The menu offers options including one entree that costs $13, an entree plus one course costs $15 and three course lunch that costs $17, including a beverage.

Upon walking into the restaurant I waited to be greeted by the hostess and to be seated in the restaurant, which was busy that day. Most of the guests that day included older people, who make up most of the cafe’s regulars.

I was seated by the hostess after waiting about 15-20 minutes. Once seated, we were given our menus and student chef bios to learn about each of the chefs who would be preparing meals for the day.

An evaluation sheet was given so that I could rate each of the chefs and the meals I ordered rated one through five, based on presentation, flavor, creativity and originality.

The menu for the week of Dec. 4-6 included two first courses, four entrees and three desserts.

Our server greeted us with water and two types of bread, marble rye loaf and focaccia. While enjoying the salad, I was given two bite size crab puffs that were complementary from the kitchen. The crab puffs were small but packed lots of flavor. 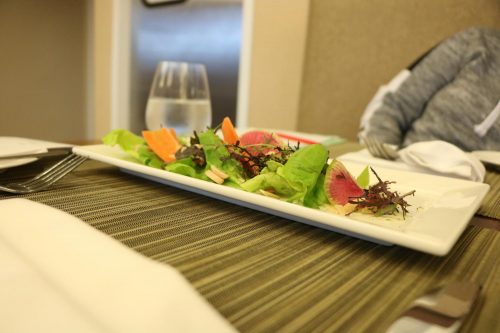 Main Entree of seared scallops served at the Oak Cafe on Dec 4, 2019. (Photo by Colin Bartley)

For my first course I tried the Butter Lettuce Salad, which included Asian pear, watermelon radish, yogurt chive dressing and almonds. The presentation of the salad was great with excellent use of color. The salad was refreshing and the almonds add a great crunch, however the dressing was put on the bottom of the plate underneath the salad therefore the flavor of the yogurt, chive dressing was lost. 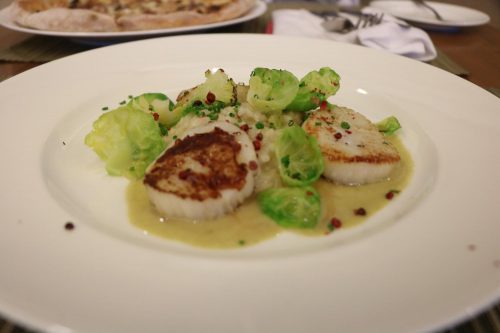 Main Entree of seared scallops served at the Oak Cafe on Dec 4, 2019. (Photo by Colin Bartley)

For the entrees we ordered the Wild Mushroom Pizza, which included sauteed shitake, oyster, chanterelle mushrooms, shallots, thyme and onions. For the second entree I got seared scallops with lemon prosecco risotto, brussels sprout leaves and caper raisin sauce. The scallops were cooked to perfection, but the risotto was mushy. The pizza was about eight slices and had lots of flavor, the toppings were evenly distributed and the crust was nice and soft.

Unfortunately, our server was not attentive, as we needed our water refilled and had dishes that needed to be cleared off the table. She also began talking to us and then abruptly left. When asking about the menu she did not give much detail or explain it thoroughly. 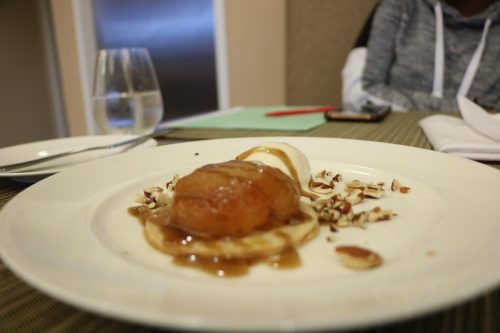 We chose the apple tart-tatin for dessert that had toasted pecan ice cream and spiced rum. The dish left a lot to be desired. It was bland with a hard cracker-like bottom that did not mesh well with the ice cream and apple, making it difficult to eat.

Overall the Oak Cafe provides large portions of food with an upscale dining environment. The hospitality of the restaurant could use improvement. The hosts and servers could be more attentive and friendly to guests.

The Oak Cafe is open Wednesday through Friday with seating between 11:30 a.m. until 1:30 p.m. and closed during school breaks.

Marquala Brown is a first semester student on the ARC Current. Next semester she hopes to graduate with an associate’s degree and transfer to Arizona State University.