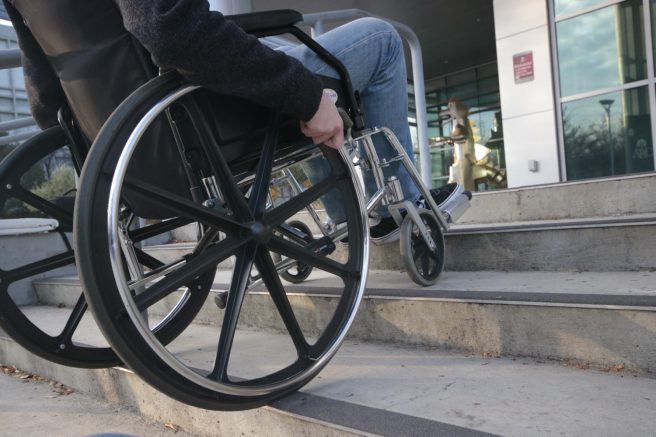 The American River College campus has failed to uphold the vision and mission statement, according to SOARD's recent findings on campus. (Photo illustration by Emily Mello)

The American River College faculty and administration recently added to the college’s vision and mission statement a commitment to social justice and equity. This new commitment was approved by the Los Rios Board of Trustees in 2017.

Now, ARC has a responsibility to live up to that statement, which applies to all ARC students, including those with disabilities that limit their movement.

It’s hard to imagine what it would be like to go long distances across campus with a physical disability or limitation, especially when not every door, bathroom, elevator or pathway is easily accessible and safe to use.

In late October, SOARD, a club on campus for students with disabilities, reached out to the Current to inform them that ARC may not be maintaining accessibility points on campus. This is an issue that should raise concern, but little has been done to correct the issues.

In light of these concerns, in February 2018, SOARD organized teams of its members to check all safety and accessibility throughout ARC, namely automatic doors, walkways, restrooms and elevators in all departments on campus.

To raise attention to their findings, they wrote up an official report to have on record, which was acknowledged by ARC President Thomas Greene who had previously expressed interest in taking action but has yet to follow through. The report was also acknowledged by Parrish Geary, the dean of student services and Americans with Disabilities Act (ADA) compliance officer Parrish Geary, who has been SOARDs closest ally in taking serious action to resolve issues within reason.

SOARD members discovered many areas on campus that disabled students should be able to access, but cannot because of doors that are too heavy, buttons that are absent, malfunctioning or not being maintained properly. Some of the biggest areas of conflict they came across were restroom inaccessibility and doorway width.

Of the 11 doors SOARD checked for automatic buttons, only four offered this service, according to SOARD’s Safety & Accessibility Feb. 27, 2018 report. This is an issue for students with physical disabilities who have to change their usual routes so they can access an automatic door to get to their classes.

Members of SOARD included in the report the bathrooms in the Technical Education and Horticulture Departments are very difficult to enter or maneuver through with wheelchair or walker assistance and did not offer automatic door service to enter.

SOARD club president Jason Lisic reported to the Current that two women from the Adaptive P.E. Department said their wheelchairs were too wide for the elevators and could not reach the buttons to operate the elevator. One of the women added the entrance was so narrow her chair has gotten stuck.

Large projects understandably take time to be approved and executed, but basic fixes still take weeks to be addressed. While ARC is legally up to ADA standards, and holds itself to standards beyond the baseline, maintenance and urgency seems to fall through the cracks.

According to Cheryl Sears, director of administrative services, older buildings built before 1970,  such as Davies Hall, are only required to be up to code for the time it was built. Davies Hall was built in 1967 and, as such, is up to code for the requirements in place for 1967. Any other additions, such as automatic doors and elevators actually go beyond ADA regulations.

In this case, going beyond is still not enough. Just because Davies Hall has extra modifications that exceed regulations from 1967, does not mean the building is entirely accessible for those with physical disabilities. ADA regulations should change according to the current year, and those modifications should be well-maintained.

These fixes may be more long-term than expected, but they should not be ignored. It should not take year after year for these issues to gain recognition and become a priority. ARC has shown little urgency in finishing projects that had been started months ago. Disabled students should not have to wait for a building to be torn down and replaced before they can have access to it.

It must not be easy as a student with a disability to circle around campus to get to an accessible restroom or to find a door that works or offers an automatic button. Students with disabilities are entitled to the same conveniences as non-disabled students on campus.

Making these fixes would be a powerful affirmation of ARC’s values to uphold social justice and equity to all groups.

ARC may already go beyond ADA regulations but the college still needs to strive to look at this campus from the perspective of others. Because a fix that might be convenient to put off for one more week, could mean another week of inconvenience, exhaustion and frustration for many.