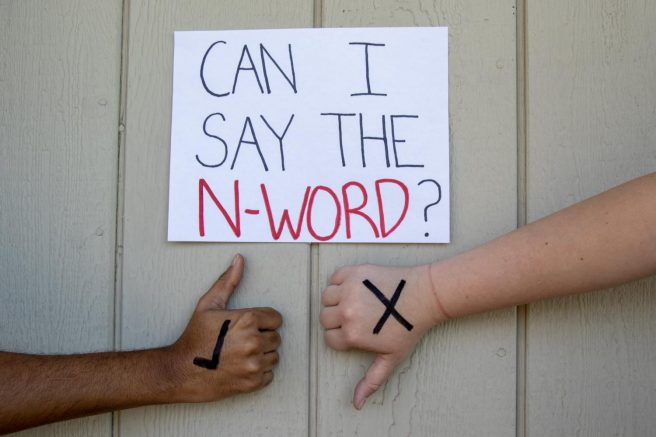 The n-word has created an ongoing controversy about who should be allowed to say it. (Photo illustration by Alexis Warren)

It seems like I have the discussion of whether or not the n-word can be said by non-black people far too often. To be real, I’ve had this conversation one too many times and it’s frustrating, to say the least, with the ignorance people demonstrate when discussing this topic.

If you have to question whether or not you can use the n-word, here’s some help: you don’t need to be saying it.

This is not to single out just white people, but includes people of Latinx, Asian, etc. backgrounds.

Do not say it.

Now, the arguments I hear often begin with: “Well, why do black people say it if they don’t want other people to say it?” or “Why do rappers and singers normalize the word in their songs?”

Black rappers and singers often talk about their struggle and up-bringing in their music to share things in common with those who are going through similar situations, and nine times out of 10, their audience is aimed at other black people.

Now, this is not to say that black artists don’t welcome non-black listeners of their music, but essentially, their target audience is black people, so when the n-word is used, think of it as two black people in conversation.

“People give words power,” Jay-Z said. “For our generation, what we did was, we took the word and we took the power out of that word. We turned a word that was very ugly and hurtful into a term of endearment.”

Keeping Jay-Z’s explanation in mind, the counter argument, “Well, why do black people say it if they don’t want other people to say it?” is answered.

Black people say it, because we have changed the meaning of the word as a minority group. If others who are not a part of the black community use the word, they’re reversing and putting power back into the meaning, considering the history.

It can’t be that hard to eliminate a word, that’s not meant for you, from your vocabulary, and if it is, that just says a lot about your character.

I am black and I don’t say the word for the sake of using myself as an example to non-black people. If I can avoid singing it in songs and not using it in everyday language, so can you.