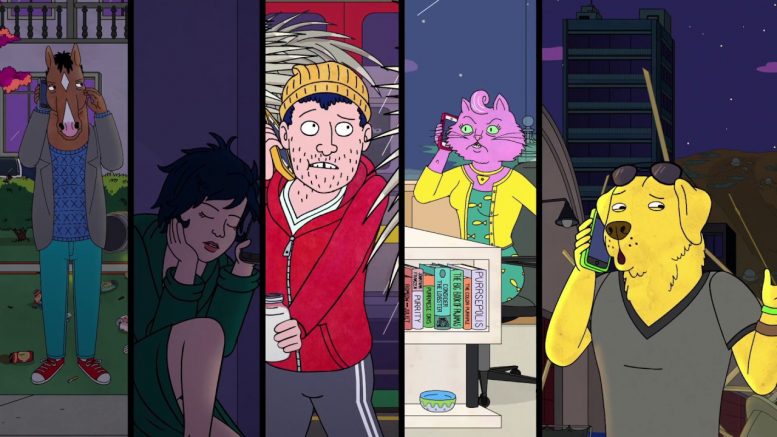 “BoJack Horseman” is a Netflix original animated adult comedy series that first premiered Aug. 22, 2014. It aired the first part of its final season on Oct. 25. The show is known for its realistic  take on dealing with depression, trauma, addiction, self-destructive behavior, racism, sexism and the human experience. The first part of the final season is very good, as it changes to a more optimistic feel. Usually, the only feeling from the show is emptiness and existential dread.

The main character is BoJack Horseman who’s a washed up ‘90s sitcom actor in his fifties, dealing with obscurity and struggling with his inner demons. Princess Carolyn (PC) is BoJack’s agent who constantly has to deal with his problems. Even though she dreams of settling down, she can’t escape her work. Todd Chavez is a happy-go-lucky, couch-surfing guy who somehow over the course of the series, reaches success. Mr. Peanutbutter is BoJack’s sitcom rival, who really just adores BoJack, and instead of fading into obscurity, remains popular despite being less talented. Diane Nguyen is Mr. Peanutbutter’s wife who ghost-wrote BoJack’s autobiography, and then became a socially aware feminist journalist. Todd and Diane are humans, while BoJack, PC and Mr. Peanutbutter are a horse, a Persian cat, and a Labrador Retriever, respectively.

“BoJack Horseman” is extremely depressing with very smart and dry humor ranging from actions of characters, situational humor and word play. For the majority of the run of “BoJack Horseman,” a pattern arises where there is an overall plot line with the main characters for the season, with each episode covering an outside issue and then cynically addressing it, until a turning point within the season occurs. Turning points happen to any, if not all, the characters and can range from a breakup to a character death. This season deters from this; spoilers are ahead.

The overall tone of this season isn’t a negative one, it is extremely positive until the final episode, where something bad is happening to BoJack and he isn’t even aware. For the majority of the season BoJack is on the mend from his alcoholism and his terrible behavior. He remains in rehab and successfully gets sober.

Each episode focuses on a main character and develops them past a problem they are having.  Examples include Mr. Peanutbutter admitting to his current wife Pickles that he cheated on her with his ex-wife Diane, PC adapting to motherhood while maintaining her career, Diane settling down and overcoming her depression and Todd dealing with his familial issues. During each of these segments, BoJack helps in some way or form without messing anything up, for once.

The final four episodes are about BoJack traveling through the US and apologizing to the people he cares about. This includes his half sister Hollyhock Manheim-Mannheim-Guerrero-Robinson-Zilberschlag-Hsung-Fonzerelli-McQuack, Diane, PC, Mr. Peanutbutter and so on. He also is vying to be a drama professor at a college.

The episodes cultivate to the final episode that involves the people that have been hurt by BoJack. This includes Kelsey Jannings, who was an indie director punished for recording a scene with BoJack that was disapproved of by the producers. This resulted in her being blacklisted from making films.

This also includes Gina Cazador, who was BoJack’s web show co-star and ex-girlfriend, until BoJack lost his grip on reality and attempted to kill her. Cazador suffers emotionally and it affects her performance on her current show. Meanwhile, some overreacting characterictures of journalists are on the trail of Sarah Lynn’s (an important side character in previous seasons) overdose and death which is leading to BoJack, more specifically his time in New Mexico where he got caught with a minor. His sister Hollyhock is also close on inadvertently uncovering the truth which may affect her relationship with BoJack. The entire truth leaves “BoJack Horseman” an overfilled powder keg ready to burst, as this information will change the majority of the casts opinion on BoJack negatively.

The show remains witty and very heartfelt. It still covers important topics like priorities, business oligarchism, alcohol abuse, depression and growing up. The show is fantastic, and the second part of the final season is scheduled to air Jan. 31, 2020. Watch it.