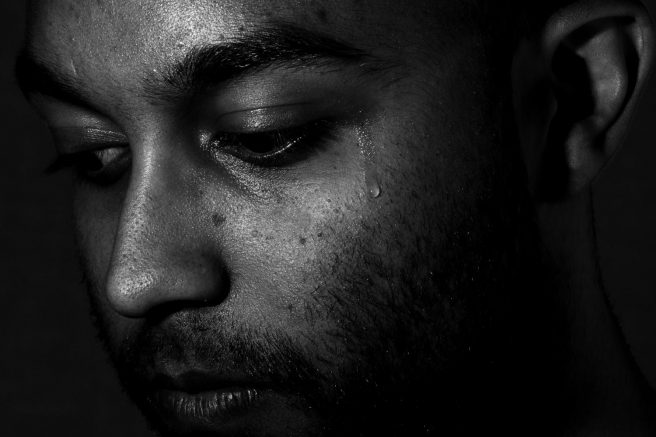 Toxic masculinity can pressure men into hiding their emotions, to avoid being perceived as weak or unmasculine. (Photo illustration by Patrick Hyun Wilson)

For decades, society has used terms like “macho,” or “red-blooded” to describe the kind of burly masculinity that men are, on some level, expected to adhere to. Today society has started to call this by another name: toxic masculinity, and it affects everyone you know.

In order to combat the ongoing problem of toxic masculinity, society needs to be conscious and open about just how problematic this issue truly is.

Toxic masculinity is what can come of teaching young boys that they can’t openly express any emotion that isn’t anger, or that “boys don’t cry.” It is the expectation that all men must be strong and protective, sexually active and athletic.

According to the National Institute of Mental Health, suicide rates among males are nearly four times higher than the rate among females. Men are also less likely to report that they’ve been sexually assaulted according to the Association of Alberta Sexual Assault Services. Both of these stats are clear indicators of the harmful impact of the toxic expectations many men suffer from.

The term “toxic masculinity” entered our vocabulary after Terry Kupers, a renowned American psychiatrist, published an article titled, “Toxic Masculinity as a Barrier to Mental Health Treatment in Prison” in 2005.  Kupers wrote that toxic masculinity was a “constellation of socially regressive male traits that serve to foster domination, the devaluation of women, homophobia, and wanton violence.”

Toxic masculinity can shape the culture of college campuses. College is a time for young people to discover and learn more about themselves and their identity, and the mindset of toxic masculinity is often forced on to young men during this impressionable time.

When men don’t fit society’s standards they may be told to “grow a pair” or be called a “sissy.” Young boys grow up fearing that their existence as a man will be questioned if they challenge those standards.

Especially as teenagers, boys will comment on aspects that reflect someone’s perceived masculinity. They learn to enforce these toxic roles on each other, often coming from a place of uncertainty in themselves. Once these ideas of ‘the perfect man’ have been reinforced in their minds, many will base their self value on how well they live up to these expectations.

When boys are called more traditionally female specific insults they begin to further equate women on that same degrading level. This only continues the cycle of sexism and violence against women.

These societal norms affect the LGBTQ+ community greatly as well. Living in a heteronormative and cisnormative society, there is pressure on many LGBTQ+ people to fit a certain manly stereotype.

Many gay men aspire to have a muscular body type, and although it can be for their own confidence and health, it could also be an attempt to exude society’s preconceived notion of masculinity in order to fit in or be desirable towards other men.

Some trans people feel that they must over-perform gender roles in order to be accepted. They may have to try harder to achieve these ideals otherwise people may choose not to recognize them as their correct gender. Many trans women have faced ostracization or misgendering by the men in their life as a part of many men’s obligation to protect and reinforce toxic masculinity.

The American Psychological Association (APA) has deemed the concept of “manliness” harmful. The male image seems to have become wildly distorted and has impacted our entire society.

According to the APA, “Masculine ideals, such as the restriction of emotional expression and the pressure to conform to expectations of dominance and aggression, may heighten the potential for boys to engage in general acts of violence including, but not limited to, bullying, assault, and/or physical and verbal aggression.”

Toxic masculinity affects everyone one way or another. It’s the reason many people have only seen their dad cry once, and men’s clothing options are limited to wearing some version of bland slacks and a shirt.

It’s the reason why many men refuse to use self-care products like moisturizer and face wash unless it is labeled specifically “FOR MEN.”

It’s the reason why forming emotional bonds, especially in romantic relationships, can be hard for many men after a lifetime of being told to hide their feelings.

Men are uncomfortable with challenging and stepping away from a construct that has been enforced against them for what feels like a lifetime, and those who benefit from toxic masculinity, like men in positions of power or authority, will not want to question it.

In order for this issue to change, society has to collectively acknowledge that this a problem that needs to be addressed, discussed and dismantled.

As long as society ignores the fact that toxic masculinity is a pervasive problem, and allows destructive concepts of ‘manliness’ to shape the male identity, violence and inequality is the inevitable and tragic outcome.

From the other side of the glass: ‘Considerations Sanity in Surrender’

2 Comments on "Editorial: Toxic Masculinity is a danger to society"