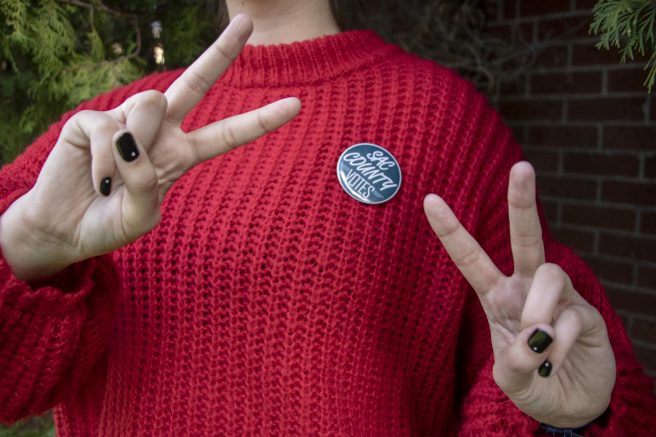 Historically young people have had the lowest voter turnout, but creating the habit early and getting involved politically can leave long-term effects. (Photo illustration by Ashley Hayes-Stone)

At almost every college campus, American River College included, political activism and activities are a part of campus life. Although politics can influence almost every aspect of our society, there are still countless young people who do not seem to care about the current political climate and how it affects their lives.

There are some people who keep up with the trending news on Twitter in order to stay afloat during water cooler conversation, and there are some who completely ignore political news altogether because of how distant it can feel from day-to-day life.

Although politics can be tumultuous and, at times stressful, it is important that everyone participates, including those of us who are only just entering our first few rounds of elections.

The people we vote for have the power to affect the lives of millions. Regardless of which side you align with, we should all agree that voting and political participation is crucial in any democracy.

There are way too many people who simply do not to vote. Although there are some acceptable reasons —ID or registration issues, illness, transportation — there are other reasons that we should question, like a lack of political interest or the common belief that a single vote has no impact.

Voting should be considered a habit, and habits are best formed when a person is young. However, too few universities have allocated solid resources ensuring that all new voters understand just how powerful their vote can be.

Instead, many colleges treat it as an optional activity. Math and English classes aren’t taught by volunteers at tables in the hallways between classes, so the importance of voting shouldn’t be either. Colleges need to integrate more civic education into their core activities and classrooms.

Professors and faculty are vital in solidifying the idea that students should always use their voice and vote. If more professors, regardless of the class, support the goals of political education, they are more likely to push students to vote and possibly welcome visitors into classrooms to talk more about the importance of being politically involved.

Students can also do more to educate themselves and stay updated on current political affairs. One of the easiest ways to do this is by using social media. Twitter is not only great for entertainment but it is also one way to keep up with breaking news.

Many politicians, including new presidential candidates such as Sen. Elizabeth Warren (D-MA) and Sen. Kamala Harris (D-CA), are active on Twitter and use the app to educate and connect with all possible voters.

Social media pages for news coverage, like the New York Times, Washington Post and Sacramento Bee, are also reliable sources that students can read to learn more about everyday politics. Sure, the amount of young people who read the newspaper isn’t high, nor is the number who watch the news on TV, but that shouldn’t stop young people from caring about politics.

According to the American Press Institute, an educational non-profit organization, 85 percent of millennials say that keeping up with the news is important to them.

With a plethora of information at their fingertips, why are younger people still not getting to the polls — even when they may have the ability to directly impact the issues that directly affect them.

For example, on Feb. 22, the Trump administration announced it would bar organizations that provide abortion referrals from receiving federal family planning money. This could potentially defund Planned Parenthood by millions of dollars.

Electing new politicians who understand the importance of Planned Parenthood, which provides comprehensive family planning and accessible reproductive healthcare could change the lives of millions.

Harmful immigration policies can make citizenship even more challenging, while queer erasure and racially charged policies can lead to further criminalization of all people, and harmful policies that take away accessible medical care could greatly affect the lives of the impoverished and disabled communities.

According to a study conducted  by Harvard University, 34 percent of people aged 18 to 24 said they were “extremely likely” to vote in 2020 because Donald Trump won in 2016.

Simply not caring about politics is not only selfish, but it is a huge privilege. The ability to turn a blind eye to political policies and decisions that don’t adversely affect you but  directly affect the lives of millions around you is an example of this privilege.

College students should use their voice to bring about the changes they want to see and college campuses should do more to help them stay educated and vote.

Be the first to comment on "Editorial: Democracy needs youth participation"