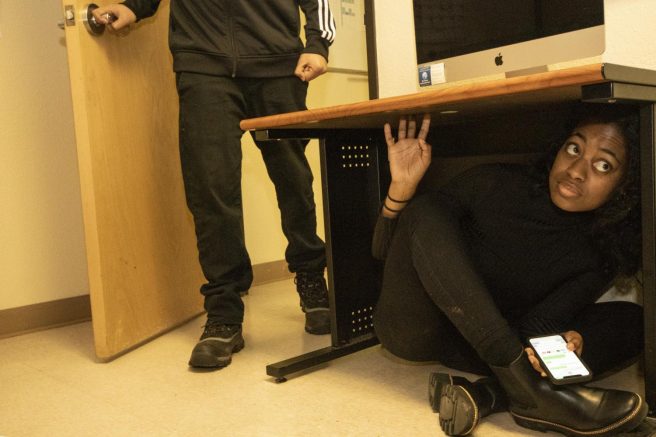 In the case of an active shooter on campus, American River College should do more to prepare it’s students and faculty on emergency procedures. (Photo by Ashley Hayes-Stone)

A potential shooter could have been roaming the campus and students were left totally unprepared for a lockdown situation —  wondering what to do, how to protect themselves and if they were in immediate danger. Should they leave the classroom, barricade the door, or hide under their desks like they were taught in grade school?

To make matters worse, ARC’s lockdown came hours after the horrific school shooting in Parkland, Florida, during which a gunman opened fire at Stoneman Douglas High School, killing 17 students and staff and injuring 17 others. In the wake of the shooting and for the first 15 minutes of the Rave alert, students and faculty had no idea where the potential danger was located on ARC’s campus.

While nothing ever came of the reported gunman on campus, this event shone a light though the holes in ARC’s and Los Rios’ emergency procedures and alert system; holes the administration, the district and the LRPD all promised to patch for the sake of their students safety.

Almost exactly a year later, nearly nothing has changed.

On the evening of Dec. 11, 2018, a masked man approached 41-year-old librarian, Amber Clark in the North Natomas Library parking lot, which is shared with ARC’s Natomas Center satellite campus. The man, later identified as Ronald Seay, fatally shot Clark before fleeing the scene as Los Rios community college students were attending classes only a few hundred feet away.

Students and staff across the district were notified by a Rave Alert that there was a crime in progress at the Natomas Center and to avoid the area. There was no notification of a lockdown,  however, only an alert after the situation was already over.

ARC’s Public Information Officer Scott Crow confirmed that the Natomas Center was on lockdown during the emergency and said they were alerted to the situation through Rave Alerts.

“At that time the Natomas Center was shut down as a precautionary measure,” Crow said.

But if students at the Natomas Center were notified of the lockdown through Rave Alerts, students at ARC and throughout the rest of the district were left in the dark, as the messages they received never mentioned a lockdown or a shooting.

Some students didn’t even receive the alert, like psychology major Alexis Prokes, who says that she did not receive any emergency notifications at all while she was attending class at the Natomas Center the night of the shooting.

“I did not actually know what was happening until a friend of mine who wasn’t even on campus anymore texted me asking if everything was OK,” Prokes said. “I was actually low-key really freaked out.”

In theory, sending out a school-wide notification makes sense and is the most efficient way of alerting students, but the margins of error that come with the system of communication are far too wide and students and staff are left unprepared if and when the system fails them.

Crow says that in order for students to receive Rave Alert notifications to their cell phones, they must have a current phone number on their student profile.

“In order to receive these alerts it’s really important that students go into eServices to update their emergency information,” Crow said.

If a student recently changed his or her cell phone number or got a new phone they might be left clueless as to any life-threatening incidents occurring on or around campus. With such a large student population and a very open campus, it is critical that every student and faculty member be aware and prepared for any emergency situation.

Not every student owns a cell phone or carries one regularly. Also, most instructors require students to turn off their devices while in class. Without a cell phone, Rave Alerts simply will not work and students will be left to figure out what is happening on campus some other way.

In the event of a possible on-campus shooting, all students and faculty should be provided with the proper techniques to keep themselves and others out of harm way. Prokes says she has never had a professor go over the proper procedure in the case of a shooting on ARC’s campus.

“I’ve never actually had a teacher go over what to do just in case something like that does happen now that I’m really thinking about it,” Prokes said.

“Run, hide, fight” is the U.S Department of Homeland Security’s “best advice” for people who find themselves in a mass shooting situation, but professors and students are not regularly provided with that information unless they seek it out themselves.

Although ARC offers faculty active shooter training throughout the year, it is only done upon request by each department on campus, according to Crow.

“Training is an ongoing process, not a one-time thing and these kinds of trainings are done on a department level upon request,” Crow said.

In the case of an active shooter entering campus, there should be absolutely no uncertainty about what to do. Students should expect the school they’re attending to provide them with the tools and resources to keep them safe.

The LRPD and the Rave Alert system do the best they can to provide security, alerts and emergency response, but safety takes more than that. It takes preparation — and an unreliable alert system is not enough.

Nobody ever wants to think that something as horrific as an active-shooter situation would ever happen here, but if we’ve learned anything from the lockdown a year ago and again in December, it’s that situations like that happen closer to home than we’d like to believe.

Are we prepared for a school emergency?

Be the first to comment on "Editorial: Rave Alert system isn’t enough"