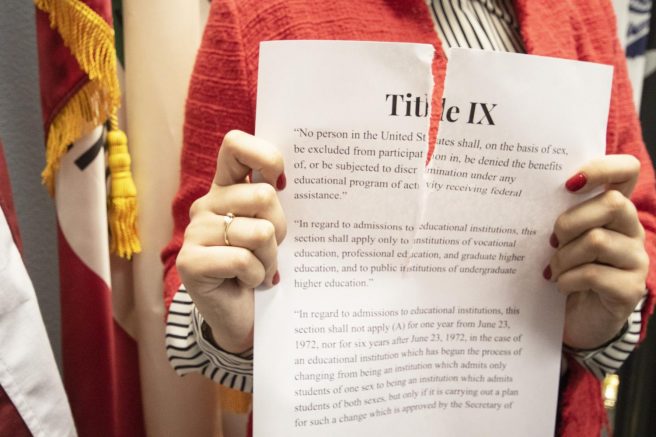 In the age of the #MeToo, a United States president accused of lewd behavior, and the swearing in of a Supreme Court judge accused of sexual assault, it’s clear we live in a society that caters toward denying accusers, protecting the accused at all costs and blaming the victims.

Sexual assault is at the forefront of the public’s attention, teetering between progression and regression. The last thing colleges need is a revocation of progressive policies for the implementation of regulations that narrow the definitions of sexual assault, protect colleges’ liability and create an atmosphere that deters victims from reporting their assault.

Yet, this is exactly what Education Secretary Betsy DeVos’ new campus sexual misconduct policies will do. DeVos’ proposed Title IX amendment is designed to protect everyone except those who need protection the most.

As the first proposed amendments made under Title IX of the Education Amendments Act passed in 1972, DeVos’ plan claims to “clarify” the definition, context and severity of the sexual harassment of students, in order to determine whether educational institutions and the accused should be held responsible.

While it would apply to schools at all levels of education, it would focus mainly on universities and colleges like American River College.

There have been a total of 71 reports of sexual assault and misconduct across all Los Rios Community College District campuses from 2015 to 2017, according to LRCCD’s 2018 Jeanne Clery Disclosure of Campus Security Policy and Campus Crime Statistics Act Report, which documents all reported crimes across all LRCCD campuses.

This total includes 25 incidents of fondling, nine of which occurred at ARC, seven incidents of rape, three of which happened at ARC, and 39 counts of domestic violence, dating violence, statutory rape or stalking, eight of the 39 were at ARC, all of which are classified in the Clery Report as sexual assault or harassment and considered a form of sexual discrimination as described by federal law through Title IX.

Under DeVos’ new policy, the number of reported assaults on Los Rios campuses could potentially go down, not because there are fewer of them, but because they may not be protected by the Department of Education’s narrow definitions of sexual misconduct or may never be reported at all because of fear and the increased likelihood of continual emotional trauma.

In September 2017, DeVos rescinded the 2011, Obama-era letter, “Dear Colleague Letter: Sexual Violence,” which outlined how campuses should respond to claims of sexual assault and cast a broad net of protection for sexual assault victims. Although “Dear Colleague Letter: Sexual Violence” served as a guideline for colleges, it was not a formal amendment under Title IX.

In DeVos’ proposal, “Title IX of the Education Amendments of 1972,” the Department of Education claims that it found multiple problems with the current sexual misconduct regulations including “overly broad definitions of sexual harassment, … right to cross-examine parties and witnesses, and adjudications reached by school administrators operating under a federal mandate to apply the lowest possible standard of evidence,” prompting the revocation of certain previous guidelines.

The new regulations intend on “defining the conduct that rises to the level of Title IX as conduct serious enough to jeopardize a person’s equal access to the recipient’s education program or activity,” according to the amendment proposal.

According to the New York Times, the new regulations would adopt the Supreme Court definition of sexual harassment as “unwelcome conduct on the basis of sex that is so severe, pervasive and objectively offensive that it denies a person access to the school’s education program or activity,” grossly narrowing what behavior students would be allowed to find uncomfortable, inappropriate or unwanted enough to report to only the most extreme cases.

DeVos’ new proposal will essentially determine what is and isn’t harassment for students who are experiencing personal trauma regardless; it will raise the level of evidence required for a case and it will allow both parties to cross-examine each other, a factor that may deter victims of assault from coming forward at all.

According to the New York Times, “[t]he Obama administration … strongly discouraged parties from personally questioning each other during hearings, believing it would be ‘traumatic or intimidating, thereby possibly escalating or perpetuating a hostile environment.’”

The Association of American Universities’ 2015 Campus Climate Survey on Sexual Assault and Sexual Misconduct found that the most common reason for not reporting incidents of sexual misconduct or assault was that it was not considered serious enough or because victims were embarrassed or felt the process would be too emotionally difficult.

In the case of reporting sexual assault, according to the Los Rios Clery Report, “all other college employees (faculty, staff or administrator) who learn about a sexual assault must report that sexual assault to the college’s Title IX Officer,” who is responsible for investigating and supporting reports that may infringe on students’ protection under Title IX.

The new amendments will change how students are expected to report sexual crimes and campuses will only be held liable for them as long as they are reported correctly and to “an official who has the authority to institute corrective measure” — instead of campus police or a Title IX officer; not professors, advisers or counselors who students would otherwise feel more comfortable opening up to. This would further deter victims from seeking justice for the crimes they suffered.

Over 90 percent of incidents of sexual assault on college campuses go unreported, according to the National Sexual Violence Resource Center (NSVRC). This statistic could climb even higher under DeVos’ new regulations, because of students who don’t feel there is enough evidence against their assailant, their situation isn’t severe enough or they are simply afraid of reporting their assault, for fear of being forced to publicly defend their often traumatic experiences.

DeVos’ proposed amendments are harmful to students who have suffered sexual assault. It will protect campuses from being held liable for reports of sexual assault that are mishandled, ignored or left under-investigated under the facade of ignorance. It will protect the accused, which isn’t unnecessary or wrong, until it infringes on the victim’s already damaged mental and emotional health and, in the case of DeVos’ proposed cross-examination amendment, it does.

Nearly two thirds of college students experience sexual harassment and 20 to 25 percent of women, as well as 15 percent of men, are forced into sex during their time in college, according to the NSVRC. These are not just numbers; these are real students, many at ARC and across Los Rios who are forced to endure uncomfortable and horrible acts of unwanted physical and verbal assault.

DeVos’ proposed regulations will not reduce the number of assaults on campuses. It will not encourage the protection of victims. It will create an environment where victim-blaming and speculation will be left to fester for the sake of defending already heavily protected accused parties and for protecting institutions’ reputations.

We should be creating an environment where students feel protected and comfortable coming forward because it’s becoming increasingly likely that we, or someone we know, will have to face this environment as a victim of sexual assault.

Trans rights are not optional

Be the first to comment on "Editorial: DeVos wants to protect everyone except victims"