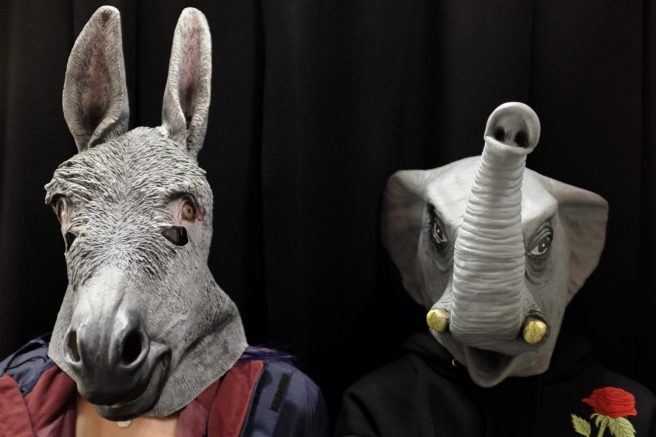 Democrats and Republicans will face off this Nov. 6, make sure to have your voice heard by voting in the midterm elections. (Photo illustration by Patrick Hyun Wilson)

The upcoming midterm election is Nov. 6.  Regardless of which side your views align with, we can all agree on the importance of casting a vote.

This year millions of young people, me included, are finally 18 and able to vote. I am also an African-American woman and voting is a way to let my voice and my views be heard.

Each election is an important one, the policies and the people we vote for have the power to change the everyday lives of millions across the United States. Whether we are voting for the next president or local representatives, those votes count.

This upcoming election is a midterm election. Midterm elections occur halfway between presidential elections and can have a huge impact on the political landscape of the United States.

Depending on who is in the House of Representatives, Congress can sway certain decisions and each party could have the advantage to pass their legislative agendas.

Today, Republicans are running Congress and because of this millions of people are at risk of losing healthcare; immigrants and their children are being detained in jail-like facilities; and our climate is at risk of being destroyed because of the numerous non believers in Congress.

Although in past years midterm elections typically have had a lower turnout, according to a 2018 study conducted by the Pew Research Center, half of all newly registered voters say they are enthusiastic about casting their very first vote.

The outcome of this midterm election will have a significant impact on Donald Trump’s presidency going forward.

Unfortunately, some new voters are not enthusiastic about their new ability to vote. Some believe their vote doesn’t matter or that voting isn’t worth their time, but they have never been more wrong.

According to a survey conducted by NBC News to find out how many young voters were  participating in the midterm elections, over a quarter of the participants said they were undecided and 20 percent said they definitely would not vote.

Every vote counts and has an impact on someone, somewhere.

Certain policies and laws might not directly affect you, your life or your families life but for minorities and people who don’t have the privilege of overlooking news, voting means everything.

If you don’t vote for you, vote for me and the countless other young black and brown people worried about losing their lives on a daily basis, vote for survivors of assault who have been silenced by their accusers, or for the people of the LGBTQ+ community who fear that their rights could be taken away at any moment.

Vote because you have the power to change the lives of millions of men and women across the country.