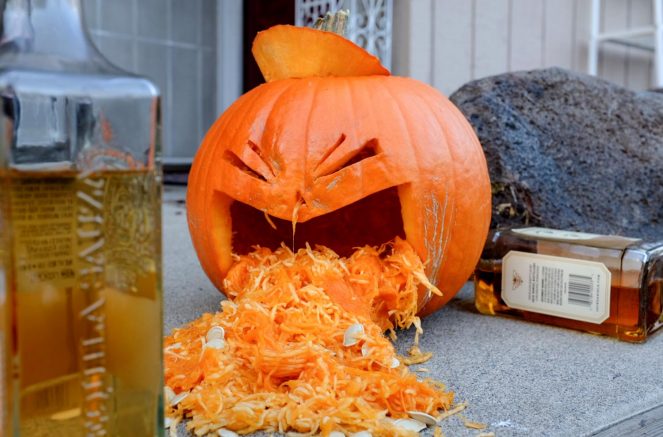 Halloween is considered to be one of the heavier binge-drinking holidays, especially for college students. Students take precaution by planning out their night and knowing their drinking limit. (Photo illustration by Patrick Hyun Wilson)

Drinking and partying are considered staples of the college experience for many students, especially during Halloween. However, there are many students who use holidays as a reason to binge drink and over-party, thus putting their safety in jeopardy.

As students, we need to examine holidays like Halloween to shine a light on how binge drinking and over-partying impacts us and how we can be more safe.

Halloween is a day mainly meant for children to enjoy horror movies, candy and for dressing up but like many other holidays, New Year’s Eve, Saint Patrick’s day or Cinco De Mayo for example, the purpose is lost in the midsts of the partying and drinking.

There isn’t a problem with drinking itself, but there is an issue when drinkers are not being safe or responsible in their decision making and when overconsumption can result in blackouts, physical fights, arrests, or a trip to the hospital for alcohol poisoning.

However, many young people disregard the possible consequences and forgo safety precautions they should be taking when they go out. When most students go out to party they’re primarily thinking about the fun they’re going to have.

“I think it depends on who your friends are, but for the most part people do use [Halloween] as an excuse [to drink excessively],” said Emilee Durbin, early childhood education major. “But I don’t think [binge drinking is] necessarily an issue if you’re with friends and you’re in a safe environment.”

Staying safe while going out first requires planning and coordination beforehand. It’s important to know where you’re going and what you’re doing.

As a precaution this Halloween and in general, you should surround yourself with people whom you trust and will hold you accountable for your drinking. Whoever you go out with, there should be a reciprocated understanding that all involved will take care of the other in the event one person drinks too much.

“Choose your group wisely, pick people who will take care of you if you do get too drunk,” Durbin said.

Knowing your limit in terms of alcohol intake is something everyone needs to take accountability for and will be a tool in keeping you safe when you go out and drink. Another part of taking accountability for your drinking is being able to resist peer pressure to drink more when you’ve already had enough.

“[If] you care about your body, you should know your limits and not over do it,” Santi Erra X, sociology major said.

Many students feel the need to relieve stress from school by drinking and partying.

“I think when we start to drink it’s like ‘oh I’m stressed I need to take a load off and [drinking] is going to help me do that,’ plus it’s also fun so that’s a double plus for me,” Erra X said.

Young adults see Halloween as the perfect night engage in drinking games, bar hopping and reckless behavior, which can all result in drunk driving.

“[If you drive drunk] you’re not only putting yourself at risk, but it’s a kid’s holiday it’s not for college students,” said Sarah Jones, liberal studies major.  “[Halloween is] for my niece or your brother, and to drink to excess, yes, you are in a way celebrating, but when you [drink and] drive you could hit a trick or treater and that’s the real horror story.”

While holidays are already dangerous times to be on the road due to drunk driving, Halloween has become especially unsafe. According to the National Highway Traffic Safety Administration, fatal drunk driving collisions occur three times more on Halloween than on New Year’s Eve.

The NHTSA also reported that between 2012 and 2016, 44 percent of all individuals killed in a car accident on Halloween involved a drunk driver.

The obvious solution to avoiding drunk driving is to plan accordingly before your night out and have a ride to your destination and back from a responsible individual.

“The designated driver — you have to have that and if you don’t, don’t go out. [You need to] have a ride or have somewhere to sleep and if you have to sleep in your ride, do it,” Jones said.

If you to plan to go out on Halloween, as another precaution, make sure to let people you trust know where you’ll be going and what your plans are for the evening.

Taking accountability for the safety of your friends and yourself when you go out is simple and will ensure you can enjoy your night and have fun without worrying.

Halloween should be enjoyed by all, however we may choose to celebrate it, but only if we take the precautions to be smart and safe.

Be the first to comment on "Current Editorial: Partying this Halloween? Drink responsibly"