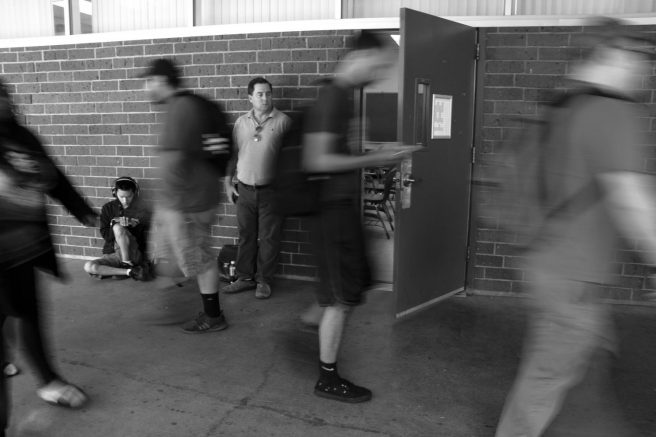 Professor Jason Vitaich waits for his class to begin as students walk around Davies Hall at American River College on Sept. 18, 2018. (Photo Illustration by Ashley Hayes-Stone)

There are many factors that contribute to the reputation of a college. Enrollment and graduation rates, student demographics, student involvement, and campus safety all play a role in the overall perception of a school and the pride students feel about the college they choose to attend.

On Sept. 5, American River College’s reputation was put on the line when an article published by the Sacramento Bee placed the school’s name in a headline next to a shocking ranking.

At the time of publication, the Bee’s article did not clarify in the headline or lead that the study referenced data pertaining to both the campus and the area around the campus — an important distinction to make when it comes to ARC’s reputation.

It was also written and posted without a reporter from the Bee getting comment from ARC beforehand, according to Scott Crow, ARC’s Public Information Officer.

“[ARC] did not have the opportunity to provide any context around the potential data or the study,” Crow wrote on behalf of ARC in a statement to the Bee.

Others, like Courtney Chin, an environmental science major at ARC, believed that the article misrepresented the data — and the school.

“[The Bee] should’ve gotten some background [information] here either from [the] campus police, students, or faculty … just because it’s not really a balanced article without having all that insight,” Chin said. “[The Bee] didn’t really take into consideration what that would make the campus look like or [how it would be] perceived by the public eye.”

If the Bee had contacted ARC it would have given the administration a chance to respond in some way — such as providing additional context or statistics, declining to comment, or even denying the report completely.

It may have also given them the opportunity to inform the Bee of the effort the campus is making to improve itself, its safety, its quality of education and its reputation.

One of the efforts ARC and the entire Los Rios Community College District is making is to educate students and staff of the dangers of driving while intoxicated.

“Any accident, any fatality, is a sad tragedy and we can always do more as a college do educate our community,” Crow said to the Current.

During the event, students gathered outside of the library to test their balance and coordination through a tricycle course while wearing drunk goggles.

“When you put those [goggles] on and try to ride a trike, it just shows you that it’s really not as simple as ‘Oh I’ve only had a couple. I can still drive and it won’t impair me.’ Well, actually it will,” Crow said.

In additional effort to make the campus and surrounding areas a safer place, the Arcade Creek Recreation and Park District is working with ARC to install a new bridge across Arcade Creek.

The bridge will be located behind the horticulture department and will connect the trails to the rest of the campus.. According to Cheryl Sears, ARC’s Director of Administrative Services Operations, many students use the trails behind the school to get onto campus.

“We had some issues out on the trail, we had a couple of sexual assaults and some creepy people,” she said. “There was this sewer pipe that went across the creek and people would use that to walk back and forth. Well, it’s not safe.”

While Arcade Parks and Rec is paying for the bridge, as well as clearing the area for fire suppression and installing motion sensor lighting, ARC is doing its part in positioning security cameras behind horticulture and installing a Los Rios Police call box near the bridge.

In addition to trying to make the campus a safer place for students and staff, ARC is also making changes to reduce its carbon footprint, by placing resources across campus that encourage eco sustainability and increased waste diversion rates.

This past summer, ARC’s Printing Services Supervisor, Don Reid received an award from the California Resource Recovery Association for an “Outstanding School Recycling Program.” This award is part of the long and ongoing project to achieve President Thomas Greene’s goal of becoming a waste-free campus.

Larger changes than the installation of new bins and the solar units have also come to ARC. Construction of the new Science, Technology, Engineering and Mathematics facility will bring students a new high-tech building with modern features and resources.

“You’re going to be able to look through the building and we’re going to have this really cool artwork that goes all three floors and you can see from outside,” Sears said. “There’s an engineering yard outside for engineering classes, a STEM yard and a lot of gathering spaces … It’s exciting, because the outcome is going to be awesome.”

Although the STEM facility will provide students with many new resources, according to Sears, the construction of the building will continue through 2020. In the meantime, students have to endure disrupted pathways, peace and safety on campus.

Last Friday, Student Senate Vice President Elena DeNecochea proposed a bill that addresses student safety and access during the construction, that included at least one additional temporary and safe pathway for students to navigate between classes and services.

The current pathway has resulted in high student traffic on the sidewalk, which has forced many students to resort to travelling in the roadway. a safety hazard for all students, and especially students with disabilities, according to DeNecochea.

One way the ARC community has alleviated the stress of navigating the construction is by providing shuttle rides to and from buildings on campus, and providing large maps and visual guides to the detour that are placed across campus.

Despite lacking CAEB members, the board that usually plans the event, the Center for Leadership and Development and student helpers always manage to help pull the campus community together on Welcome and Club Days. These events encourage and facilitate student leadership, diversity, community building and involvement, and provide resources for academic success.

While ARC’s reputation may have hung on the line in the Bee’s misleading headline, the campus itself is ever improving for the sake of it’s students and staff.

“A college can have a reputation, but I think ultimately, what students are looking at is ‘how can this help me get a job and a career?’,” Crow said. “I think in the social space what we can try to do, is if it’s something we see, and we can go ahead and provide some context and some clarification around that, or just a response… I think that that, if nothing else, tries to communicate, we’re listening.”

ARC football player has eyes on the next level

Be the first to comment on "Current editorial: ARC fights negative reputation"