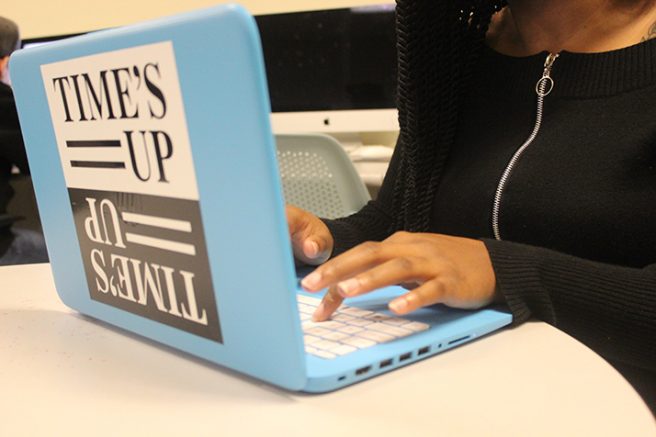 Time’s Up is a national movement against sexual harassment and assault in the workplace that started on Jan. 1. (Photo Illustration by Brienna Edwards)

Although the month of March is commonly known as Women’s History Month in some states, and March 8  declared International Women’s Day, women are still appreciated and praised year long for the brave actions they are taking against gender pay disparity and sexual harassment.

Different aspects are starting to change within our society when it comes to how women are treated in the workplace with the help and determination of many women paving the way for future generations, including college students entering the workforce.

The organizations started by the many women of Hollywood, Time’s Up in particular, are paving the way for college women and young girls by setting the example that we shouldn’t settle for mistreatment in the workplace.

The Time’s Up movement has helped me, as a young woman, understand what I should expect in the workspace when it comes to the worldwide issue of equal pay.

Time’s Up addresses the systemic inequality and injustice in the workplace that have kept underrepresented groups from reaching their full potential, according to information posted on the Time’s Up Now website.

So many big stars are behind and supporting this movement, and a lot of young girls are starting to become more aware of what Time’s Up stands for.

When asked if promotions are based on fair and objective criteria, 40 percent of women and 48 percent of men believe this is true, according to the Women in the Workplace website, which seems exceptionally low.

I was introduced to the movement after one of my favorite celebrities, Catt Sadler, shortly became a part of Time’s Up after quitting her job at the E Entertainment network on Dec 19,  after learning that her male co host, Jason Kennedy, was earning double her salary.

Many actresses at the 75th Golden Globes called out the E network on national, live television on behalf of Sadler’s departure from the network as a result to gender pay disparity.

I would have never known that gender pay disparity still existed in the 21st century if it weren’t for Sadler taking a brave stand for not only herself, but for young women like myself.

A lot of teenagers start some of their first jobs around the ages of 16, 17 or 18. From personal experience, I started my first and current job and I was always rolling with the punches when it came to things I didn’t feel I had the right to speak up against, such as the amount of hours I was receiving.

I didn’t believe that I had a say in demanding more hours since I was so new to the job and I had only just turned 18.

Fast forward to me at 19 and I have changed completely when it comes to speaking up and taking a stand for what I deserve in my workplace, and I can give huge thanks to Catt Sadler along with the many amazing women behind Time’s Up for setting an example.

As Time’s Up says, “No more silence. No more waiting. No more tolerance for discrimination, harassment, or abuse.”