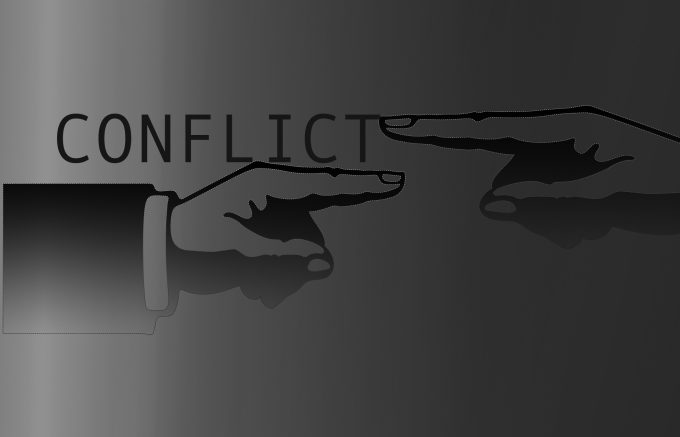 Embrace the necessity of constructive conflict on campus. (illustration by Lidiya Grib)

Although most people prefer to avoid conflict, we must approach the semester with a different mindset in which we are willing to engage in constructive conflict with others, and especially ourselves.

Conflict is defined as a serious disagreement or argument, typically a protracted and continuous one.

Why do we avoid conflict? Conflicts are avoided on a interpersonal level because they generally create uncomfortable situations, which we would prefer not to be in.

Reasons for this may be that we don’t want to face the possibility of being proven wrong; we don’t know why we might have a particular belief and won’t be able to support it with facts and reasons; or we’re simply content with the way we see things and don’t want to change our already made up minds.

If we understand how a particular kind of conflict can be positive, however, we can benefit from such situations rather than avoid them.

Ted talk speaker Margaret Heffernan, who explores human thought patterns of conflict avoidance and selective blindness, coins the term “constructive conflict” as seeking out people and ideas that are different from ourselves to disprove our beliefs and opinions.

Heffernan explains that only by “not being able to prove [something] wrong” do we get the due confidence in knowing whether it’s right or not.

As students with such different backgrounds and experiences coupled together on a diverse campus, this is just the mindset we need.

We may find ourselves in a scenario where we are in a politics classroom with a professor and room full of people with radically different opinion than us.

We must be willing to have open minds regarding the information and opinions we hear that we might not necessarily agree with.

In this sense, constructive conflict should lead us to prove ourselves wrong by evaluating our opinions and judgments to expose the bias and prejudice we may have.

We can do that by surrounding ourselves with people we wouldn’t normally find ourselves gravitating toward.

Someone with a non-religious background, for example, can learn about the Muslim, Christian, Jewish, or Catholic religion.

Likewise, as students who happen to be in a learning community in the first place, we could strive to learn about differing or opposing political, philosophical and social views.

We all have implicit and explicit biases and prejudices about individuals, groups, ideas, beliefs and people and we don’t always realize that we have them. The goal is to draw these biases out.

The way that constrictive conflicts can be a step toward critical thinking is by seeking to disprove our own thinking to possibly prove how we may be wrong in our thinking.

This is a healthy mindset we can bring with us into this new semester; by embracing this new mindset of constructive conflict, we could come to learn not only about other people, cultures, ideas and beliefs but also about ourselves.

We should seek to prove ourselves wrong by disagreeing with our own beliefs; in the process, we may find flaws in our own way of thinking or come to at least understand the other way of thinking.

We should therefore strive to analyze and evaluate whether our thoughts, beliefs, opinions and judgments show signs of biases we might have about the world as well as others around us.

American River College is a widely diverse community where differing ideas and beliefs are valued, encouraged and embraced.

Being in such a diverse college as this makes it very likely that we will run into people that believe, practice and support ideas and ways of living that we may not entirely agree with. Or ones that we may entirely be opposed to.

By challenging ourselves in this way, we can uncover the preconceived notions and beliefs we have about the world as well as others in order to  understand them. And most of all, to engage in conflict.

Be the first to comment on "Opinion: Embrace the necessity of constructive conflict"