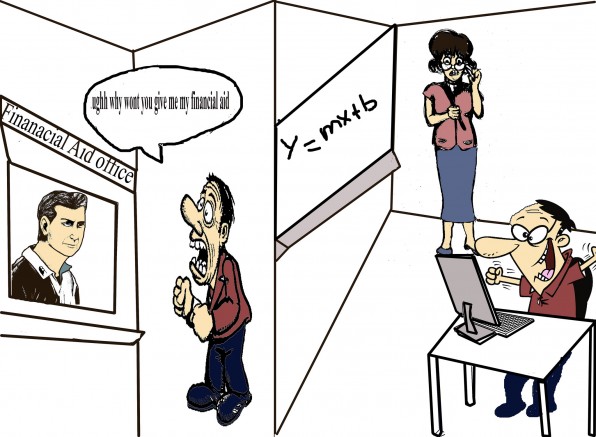 Some students might feel like financial aid is a right, but they don't always live up to the responsibilities of the opportunity. (Photo Illustration by Allante Morris)

California has the lowest tuition in the country for community college, so shouldn’t students receiving aid make the most of the opportunity afforded to them by taxpayers?

A recent report from The Institute for College Access & Success (TICAS) highlighted how difficult it is for students on aid to finish college, even in California.

Although getting through college is difficult, especially when you have to work, students at American River College have it better than most across the country.

67 percent of students at ARC are supported by financial aid adding up to nearly $50 million per year, according to the National Center for Educational Statistics (NCES).

Yet at ARC, only eight percent graduated within the “normal time” for their program of study, also according to the NCES.

Even students who graduated within twice as long as “normal time” for a two-year program, had a 37 percent graduation rate.

This suggests that despite efforts to fund and help offset the financial challenge of making it through college, most students are unsuccessful.

This is likely, at least in part, responsible for the changes that have been made to the California Board of Governors (BOG) fee waiver for the Los Rios Community College District. Too much money is being spent on students who do not make it through school.

Too many students at ARC cut classes, complain about being in class and pay more attention to their phones than their professors.

Professors waste time constantly telling students to stay off their phones and to be on time to class, and answering questions that are answered in the syllabus.

These are things students receiving financial aid for college should not have to be told. Financial aid is a privilege, not a right, and if students are going to accept financial aid, they should accept the responsibilities that come with being a student.

California students need to be examples of how financial aid bolsters educational success, rather than how it is taken for granted.

Be the first to comment on "Opinion: Financial aid is a privilege, not a right"