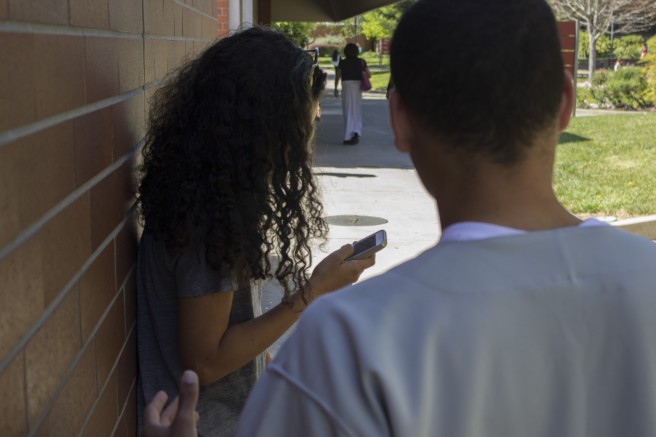 In the digital age, we can document anything we want to. It doesn't mean that we should. (Photo Illustration by Timothy Lipuma)

News surfaced on March 30 that Los Angeles Lakers guard D’Angelo Russell secretly recorded  teammate Nick Young admitting to an alleged infidelity, and the fallout both on social media and in the news brought to light yet another example of why the trending need to document every moment of the day has its repercussions.

In typical response, social media went ablaze with its reaction, while still managing not to see the bigger picture. This‒all of it‒needs to stop.

The negative reaction toward Russell has been astonishingly one-sided, and while he is partially at fault, the lack of understanding by the public on the true issues of the incident is abhorrent.

People don’t need to document every facet of their (or anyone else’s) daily life, and it has to be understood that there are always possible consequences to posting ‒ or even just capturing ‒ moments with the aid of anything other than eyesight.

Typically, the argument made here is the “think before you post” spiel. That argument isn’t incorrect, but collectively, our society is not yet at that point.

For example, it may seem harmless at first to record a coworker making an inside joke that some fellow coworkers understand is a joke, but what if that video surfaces later where that person’s boss has access to it? Not looking so good for that person’s employment status in most cases.

Social media is fun, and it should be. It’s a terrific way to interact with family, friends and acquaintances on a broad scale and keep those who are too far away to interact face-to-face up to date on the important events of one’s life.

But feeling the need not just to put everything on social media, but to document everything and anything, is just not necessary.

According to one study done by Linda Henkel of Fairfield University (Connecticut), taking photographs actually weakens cognitive memory of capturing a moment.

Another study showed that an astounding 77 percent of college students use Snapchat on a daily basis.

The fact that people are primarily upset over Russell’s boneheaded move and his violation of “bro code” shows just how far society has to go before understanding the capabilities of mobile devices and the possible ramifications of utilizing those capabilities.

This is without mention of the fact that Young was potentially unfaithful to fiancee Iggy Azalea, which has become the alternative story out of the situation.

Azalea isn’t upset at Russell, she’s said as much, but if she was going to find out, she probably would’ve preferred to handle it privately with Young instead of through the twitterverse and several other forms of social media blasting all three of them for their actions.

Sure, there are times when letting the world know what you’re up to is harmless, such as a picture of your lunch or letting everyone know about today’s gym experience, but it should be simultaneously recognized that no post is critical knowledge for anyone and shouldn’t dictate any actions or feelings.

And particularly when it comes to public forums, be aware that someone, somewhere, is always watching.

While that probably cannot be completely eradicated, the only way to dilute such actions is not just thinking before you post, but first realizing what is and isn’t worthy of capturing beyond your own cognizance.

Be the first to comment on "Opinion: Think before you document"