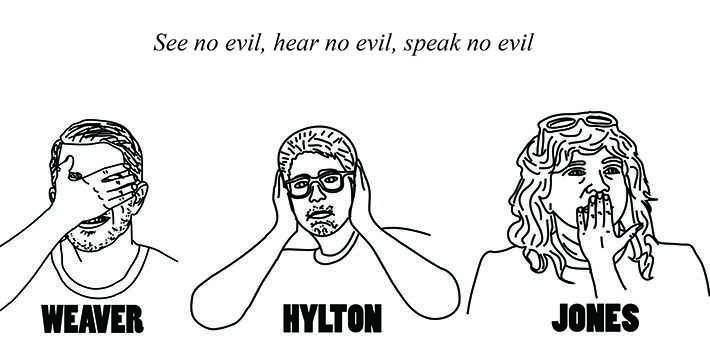 It is highly disappointing that after multiple members of the American River College student government claimed to not be certain of all of the facts of the Holocaust, they did not take  the opportunity to attend an ARC event that featured a speaker who is a Holocaust survivor.

This shows that the behavior of Los Rios Student Trustee Cameron Weaver’s defenders had little to do with the Holocaust itself, but was actually about defending a friend whose actions shouldn’t have been defended.

After defending Weaver’s comments saying that “nobody can say” if the Holocaust took place, ASB Student Senate Director of Legislative Affairs Laurie Jones said in an email to members of ASB and the Current that the school should host a College Hour or Brave Space dialogue about genocide.

Jones also said that the Current should publish “an in-depth article or series on the Holocaust so that those of us who believe it have the specific facts to back up the numbers.”

However, when Weaver and the Associated Student Body members who defended his bizarre and insulting statements had the opportunity to hear from Holocaust survivor Leon Malmed at a college hour on Nov. 10, they all had an excuse about why they didn’t go.

ASB Student Senate President David Hylton, who lamented in the wake of the Weaver controversy that “We can’t talk about the Holocaust because now we’re going to get persecuted and thrown up on a cross for talking about the Holocaust,” also did not attend.

Hylton wouldn’t even give a reason, saying that he wouldn’t answer any questions he couldn’t have sent to him via email in advance.

Nicholson’s excuse for the absence of Weaver’s defenders was that “I don’t think the board had a chance to formally send anyone (to the presentation).”

Obviously, Malmed’s presentation was an optional event. But when everybody has an excuse as to why they missed it, it has to be asked if any of them wanted to attend in the first place.

This is a problem because in an educational institution, students — especially those who style themselves “student leaders” — should take the opportunity to educate themselves about the fact that the Holocaust isn’t a topic on which there is any legitimate debate.

The Holocaust happened. It is one of the most documented crimes in human history. There’s an extensive paper trail from the Nazis, film taken by the Allies and millions of eyewitnesses.

General Dwight Eisenhower, the supreme commander of Allied forces in Europe during World War II, ordered that photographs and film be taken of the concentration camps.

Eisenhower wrote to General George Marshall on April 12, 1945 that he visited the Buchenwald camps in central Germany “very deliberately, in order to be in a position to give first-hand evidence of these things if ever, in the future, there develops a tendency to charge these allegations merely to ‘propaganda.’ ”

As Aaron Breitbart of the Simon Wiesenthal Center in Los Angeles told the Current on Sept. 18, “The people on trial at Nuremberg answered that they were just following orders. They never said it never happened because it obviously did.”

Weaver, Jones, Hylton and Nicholson not only are incapable of differentiating between a fact and an incorrect belief — they have no real interest in doing so.

If they truly wanted to learn about the facts of the Holocaust, if they were truly interested in answering their questions, then there is no better way than to actually talk with someone who was there.

But, of course, the truth is not what ASB is interested in. As Sen. Tamara Dunning said after the board voted not to recall Weaver, Senate is more interested in defending their friend — right or wrong.

Learning how to be an adult is largely about learning that people have to be accountable for their actions.

If Jones recommends a Holocaust survivor come and speak, then as a “student leader” she should make herself aware when one comes to campus to do just that. She has the utmost responsibility to know what is happening on this campus.

If Weaver, Hylton and Jones have questions about something as obvious as the Holocaust, they need to take the time to have those questions answered.

If Nicholson thinks Weaver’s opinion should be accepted, then he should take the time to learn about why denying the Holocaust is not about opinion, but about clearly established facts. And not just any facts, but the fact that within living memory millions of people were brutally slaughtered just because they were Jewish, Slavic, LGBT, or held religious or political views against an immoral regime.

But as long as it’s their friend Cameron Weaver who is repeating the ramblings of neo-Nazis and anti-Semites, there is no accountability at ASB — only comfort in ignorance.