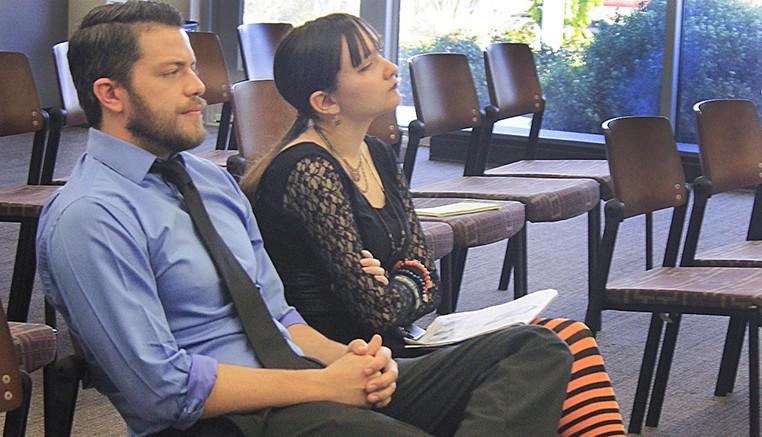 Los Rios Student Trustee Cameron Weaver, left, and Clubs and Events Board Vice President Mary Stedman listen while the Student Senate discusses efforts to recall Weaver at its meeting Thursday. The Senate decided not to recall Weaver, in spite of his comments casting doubt on whether the Holocaust actually happened. (Photo by Jordan Schauberger)

Los Rios Student Trustee Cameron Weaver, who has been under fire since a Sept. 16 interview with the Current where he questioned whether the Holocaust actually happened, said last week that his statements were “completely misrepresented.”

In response, the Current has decided to release the full 55-minute interview to the public, and now directly challenge to Weaver to explain in plain language how he was “misrepresented.” He owes it to those who voted for him and the district whose image he has blighted to answer where, specifically, our reporting of his remarks was inaccurate.

In a bid to retain his paid position on the Los Rios Board of Trustees, Weaver delivered a speech to ARC’s Associated Student Body Student Senate on Oct. 15 saying that “Despite the fact that I’ve been completely misrepresented in ARC Current’s initial coverage as well as all the subsequent local news coverage, I recognize that this entire event has cast the district in a negative light.”

Weaver has had multiple opportunities to apologize for his offensive statements, but has instead rubbed salt in the wound by refusing to address what he said. The only iota of remorse he’s shown has been in the form of an apology to the District “for the tumult and distraction caused by the recent coverage of me.”

In spite of his remarks being quoted on ABC10 News and in the Sacramento Bee, both of whom had copies of the full audio recording of the initial interview, Weaver has been consistently claiming that his own recorded statements “(do) not accurately reflect my views, beliefs, or convictions.”

On top of refusing to apologize to the Jewish community and to the students he let down, Weaver’s claims of being “misrepresented” with no explanation as to how are a subterfuge designed to avoid taking accountability.

The ARC Student Senate voted 7-2 against supporting a recall effort, which three of the four Los Rios college student governments would have to endorse for one to go forward.

At the meeting, acting Student Senate President David Hylton, a friend of Weaver’s, criticized the Current for not releasing the entirety of the hour-long interview, asking “What is the adequate justification to keep 70 percent of a recording secret?”

In fact, all the sections of the Weaver interview regarding the Holocaust had already been posted to YouTube, in full, with both questions and answers and that local media had been provided with the full 55-minute interview, and still proceeded to report on the story, just as the Current did.

It is blatantly dishonest and an insult to the intelligence of Los Rios students, faculty, staff and administration for Weaver to make his claim without a smidgen of evidence to support it in a last-ditch attempt to keep his title.

Weaver said during that interview that “I’m definitely not going to go out and venture and say anything like ‘Oh, Holocaust didn’t happen.’ There are tons of people that make that argument. … From a really unbiased perspective, I completely disagree, but I also completely agree. What I mean when I say both is that I don’t know the answer.”

There is no way that these statements could be “completely misrepresented.”

It’s time for Weaver to stop talking and to start owning up.

If Weaver cares to explain himself to the students he represents and say how he was misrepresented, we will gladly publish it as a letter to the editor.

And if releasing the full audio will help him with his case, we’re more than happy to provide it.

2 Comments on "Editorial: Student Trustee needs to prove how he was ‘misrepresented’"