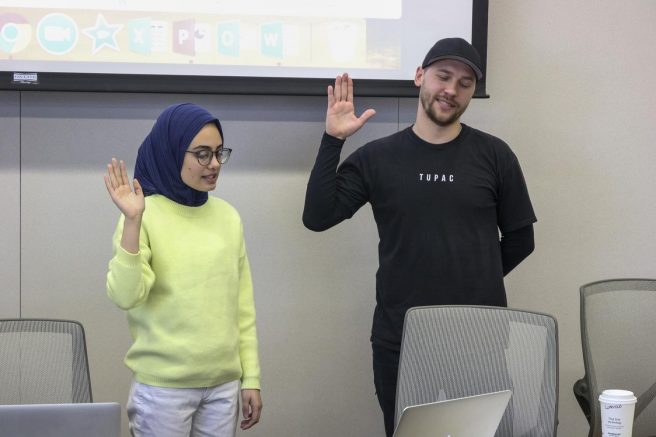 The American River College Associated Student Body Senate met on Feb. 7 to discuss multiple bills, including the ARC Promo Team Bill, which was approved. The senate also swore in its newest member.

Before ASB discussed the bills, they swore in new senator, Ross Kolesnikov. Kolesnikov said he is hoping to make a difference not only for ASB, but for the students who attend ARC.

“I want to be part of a bigger picture, and help make change,” Kolesnikov said. “As time goes on I’ll get a better understanding on what my role will be here, and I hope to help students and clubs at ARC.”

The first bill that was voted on was the Society Club Pacific Sociological Association (PSA) Conference Bill to allocate $3,000 to students and advisors from the SOC to go to the conference held in Eugene, OR on March 26 through 29. Out of 11 votes, ASB voted yes unanimously allowing the club the funds for their trip.

ASB also voted on the ARC Promo Team Bill, which will grant the use of $6,000 for advertisement for clubs and events that will be going on throughout campus. Items such as posters, flyers and promotional items will be purchased to promote these events on campus. Other items that will be purchased include two tents, four half walls for the tents, three banner displays, and other items for the tents.

According to Senator Nick Medvediev, not all of the $6,000 dollars will be used for advertisements, and should be referred to as more of a “budget line” for ARC.

“It’s for long term spending,”  Medvediev said. “Initially we’re going to spend around $4,000 for these supplies.”

Before the bill was voted on, however, Kolesnikov objected to allocate $6,000, and wanted to strike it down to $4,000. This motion did not pass, and with a 10-to-one vote, the bill passed.

ASB was scheduled to vote on the Printing Bill, but the vote was postponed for the next meeting due to lack of time.

The Mobile Black History Museum Bill was the next topic of discussion. This bill would allow the spending of $3,000 for a museum to display artifacts from history relating to black history month to be on display in the Student Center on Thursday Feb. 13, from 10 a.m. to 2 p.m. ASB voted unanimously to pass it, granting funds for the displays.

The last bill voted on was the Your Voice Your Value Bill. This bill would allocate up to $1,300 for food and decorating supplies for the event on Thursday Feb. 13. This event would allow students to come by the Student Center and have a chance to talk to members of ASB and voice concerns they have on campus. The senate voted unanimously to pass it..

There will be no ASB meeting on Feb. 14 because of the President’s Day holiday. The next meeting is scheduled for Feb. 21 at 10:30 a.m.

Be the first to comment on "ASB welcomes newest senate member, approves up to $13,300 on multiple bills"