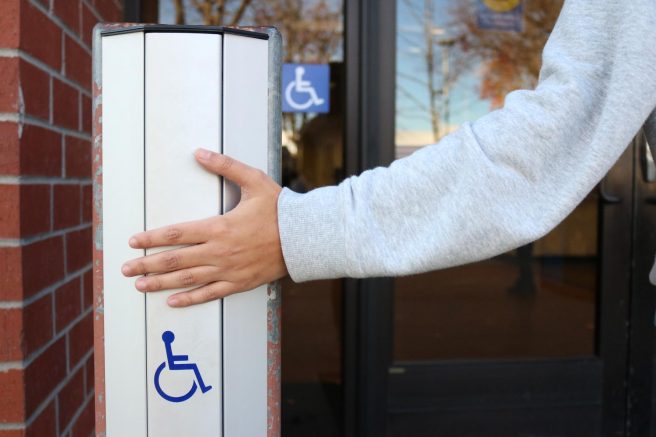 ARC’s Students of American River with Disabilities (SOARD) club surveyed the campus and reported on safety and accessibility concerns in February 2018. After a meeting with ARC president Thomas Greene, the administration began to address some of the concerns. (Photo by Jennah Booth)

Over multiple semesters, American River College’s Students of American River with Disabilities (SOARD) club has advocated for students like themselves, who they say feel invisible on this campus and within society.

“We as disabled people, we feel as if we’re shut out and as if they don’t care,” said Rudy Fox, who is a member of SOARD.

In February 2018, SOARD club members surveyed the ARC campus for safety and accessibility issues from the perspective of the student population with disabilities.

According to SOARD’s mission statement, the club aims to “give students with disabilities a voice on campus” and assist them through their college experiences and help them develop leadership skills.

According to club president Jason Lisic, many of SOARD’s club members noticed areas on campus that posed safety and accessibility risks to students with limited mobility.

Under the advice of Disability Services and Programs for Students (DSPS) coordinator Nisha Beckhorn and previous SOARD advisor Raye Maero, SOARD members split up different sections of the campus and checked everything from doors, bathrooms and ramps to elevators and emergency call boxes.

One of the most common issues members found across campus was with accessibility to buildings and restrooms.

SOARD reported that many of the doors were heavy and difficult to push open, especially for someone who is in a wheelchair or carrying an assistive cane, walking stick or walker.

They also found that while there are many automatic doors across campus, the buttons to open them often don’t work. Members in SOARD also said that there are not enough automatic doors throughout campus. Lisic explained this is difficult for students with wheelchairs, since they have to change their route to find a door with an automatic button.

Members additionally reported issues with the elevators in the ARC parking garage, specifically the buttons being broken, making them unable to push to operate the elevator. Lisic said that when he attempted to report the issue via the intercom system provided in the elevators, he did not get a response after multiple attempts to contact someone. It wasn’t until he informed a maintenance worker from the P.E. Department that the issue was resolved.

The club also found that many restrooms on campus, specifically in the Technical Education and Horticulture Department buildings are too small and difficult to get into and maneuver inside of and did not have automatic doors. Lisic said he was informed by Beckhorn that not all bathrooms are required to have automatic doors, and this is an issue for many students with physical disabilities.

In addition to accessibility issues, SOARD also documented a number of safety risks including areas that drain water onto the walkway outside of the library and large holes in walkways around campus where bollards have been removed and not replaced.

They also found various places on campus that were lacking in enough ADA accessible desks and where printers where too high for people in wheelchairs to use.

Following their report, SOARD invited ARC President Thomas Greene to speak at one of their meetings on safety and accessibility. According to Lisic, when Greene attended the meeting and heard SOARD’s complaints, he expressed strong interest in SOARD’s report and making changes on campus to improve on the issues presented.

“They told us that they were going to see about making some changes; double check everything and they would try and fix all those issues,” Lisic said. “It’s been about a year since that meeting.”

On Dec. 2, SOARD held its last meeting of the semester and the subject of the report was addressed again. Many members expressed frustration because since the meeting with Greene, they said they haven’t heard or seen any progress, and while the campus has been addressing some issues, members of SOARD believe they aren’t being addressed quickly enough.

Laticia Landeros was one of the club members who was most expressive at the meeting.

“I know it takes time, but there’s a hole out there that we can fall through, and there’s different ramps that we can’t get through doors,” Landeros said.

“I oversee the campus compliance with 504 Federal Regulations and Board approved policy to ensure nondiscrimination on the basis of disability,” Geary wrote in an email interview with the Current. “I serve as the first level grievance/complaint official when discrimination on the basis of disability is alleged. I will impartially investigate any complaint.”

Geary submitted the report to Cheryl Sears, the college’s director of administrative services, who said the campus has since begun to address the issues despite not communicating to SOARD directly.

Geary, who was scheduled to speak at the Dec. 2 SOARD meeting, but was unable to attend, said he was made aware of the clubs frustrations.

“Going forward, I along with other administrators will work to engage more with the SOARD Club,” he wrote. “The members of SOARD can always engage with any Administrator or Faculty member to get assistance to their questions. We appreciate their input and voice.”

According to Sears, it’s a constant battle for operations to keep up the maintenance on campus, making the short-term fixes a still lengthy process.

“There’s nothing in the code that stipulates we have to install any of those ADA buttons,” she said. “Nothing says that we even have to do that at all.”

In order to be in compliance with ADA standards, the force needed to open campus doors must be 5 pounds or less, unless the door is a fire exit, in which case the weight increases to 8 pounds, according to Sears.

Campus Operations checks the weight of every door on campus twice a year, according to Sears, but because of the amount of traffic on campus she says their calibration can easily change.

Sears said that because many of the buildings on campus are so old, their building codes don’t meet modern ADA standards.

“In 1967 [when it was built], Davies Hall was to code. Well that was a heck of a long time ago,” Sears said. “So we’re required to maintain that code, and we do increments of improvements as we go to make it as accessible as possible, but there’s no requirements in the building code.”

Sears said many complaints are regarding older buildings on campus, but students will have to wait for those buildings to be torn down and replaced before any improvements can be made.

Sears explained that Operations evaluates any concerns that they are made aware of, but that some of SOARD’s suggested changes are regarding things that would be disruptive or impossible.

Lisic said one of the struggles students in wheelchairs face is the bar that divides the double doors on campus. According to Sears, the doors could not be secured if the bar was removed and despite student’s continued struggles, the doors are up to ADA standards.

“When these requests come in, we have to assess overall,” Sears said. “So what we try to do is collectively get as much information as we can, and do what’s best for the majority of the people.”

In terms of the safety concerns, Sears said they’re working closely with groundskeepers to make sure water doesn’t pool up anywhere on campus. They also designed caps to cover the holes in walkways where bollards have been removed.

According to Sears, the best way for students to address their accessibility or safety concerns is by talking with a professor, Geary or contacting Operations.

Landeros said that among the frustrations she faces on campus, her future is dependent on her education.

SOARD members all reiterated that they would continue to speak up for students with disabilities, despite their personal frustrations.

“We’re not dead. We’re here,” Landeros said. “And if we have to continue to raise our voice, that’s exactly what we’re going to do.”