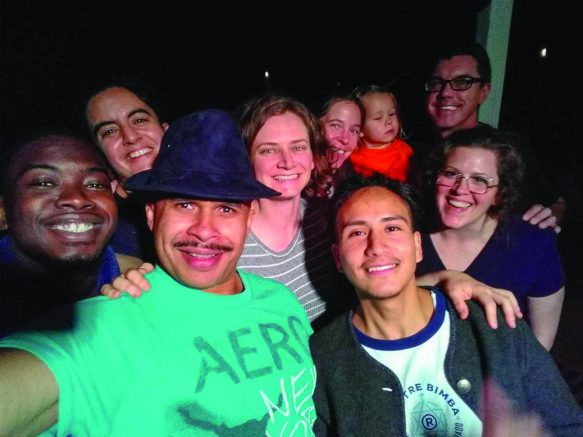 On Oct. 22, American River College art student and musician Miguel Gozalez-Miranda was released from the Yuba County Jail after being detained by the US Immagration and Customs Enforcements (ICE) in early June. Although he did not know when exactly he would be released, Gonazalez-Miranda said during his detainment he remained hopeful that the situation would work itself out.

“I always knew that it was going to be a process that would require at least three or four months,” Gonzalez-Miranda said. “I [went through] a process called post-conviction relief, which changed the title of my previous conviction, the conviction that gave them [ICE] the right to pick me up.”

Gonzalez-Miranda was arrested by ICE for failure to pay legal fees from a misdemeanor committed in his teenage years, according to a story written by Sacramento News & Review in July.

However, the post-conviction release process cleared his record and allowed him to be released from detainment.

According to the Immigrant Legal Resource Center’s website, ilrc.org, “immigrants with criminal convictions are more vulnerable than any other group to being a target for deportation and make up the overwhelming majority of deportations that occur in any year.”

In other words, an immigrant with a criminal record — regardless of the severity — is more likely to face possible deportation or detainment.

The process of detainment was harrowing for Gonzalez-Miranda, as he said he struggled with many emotions during that time.

“It was depressing and frustrating to be under those circumstances,” Gonzalez-Miranda said. “Especially when three individuals come in with guns in their hands and tell you ‘hey you’re being arrested for something that happened many years ago and you are under ICE custody.’ At that moment, my life stopped.”

Despite the emotions, Gonzalez-Miranda said he tried his best to accept the situation for what it was and take it in stride.

“Life on the inside really just depends on you and how you take it,” he said.

While at the Yuba County Jail, Gonzalez-Miranda said he met many interesting people. But he also realized that forming relationships with other detainees was difficult because of the rate at which they would move in and out of the jail.

“Any space where you’re with people for a long period of time allows for bonding, it reminded me of elementary school,” Gozalez-Miranda said. “You can see people connecting in a profound way, and then the next day, they leave. And then everything resets like nothing happened.”

PRIDE Program Specialist at ARC Alejandra Garcia has known Gonzalez-Miranda for a few years, and visited Gonzalez-Miranda while he was in detainment. Garcia said that the experience of visiting their friend at the Yuba County Jail was a shocking one.

“You walk in and you see all the other families, families of color, waiting to see their loved ones,” Garcia said. “When I went to see Miguel, he had to sit behind a window. I couldn’t even shake his hand or give him a hug.”

Garcia said that they could feel dreadful energy by just walking in the detention center.

“The energy that you could feel in that place, the pain, the sorrow, it was very strong,” Garcia said. “[These are people] who are doing a very human thing: migrating.”

Garcia said they believe that the way immigrants are being treated today is a contradiction to what this country was built on.

“When you think about the things that immigrants go through today, how people are rounded up and torn away from their families, it just seems to counter to the narrative that [the United States] is supposed to be a place made up of people who have migrated from all over the planet,” Garcia said.

But while Garcia could see the pain in their friend’s eyes when seeing him behind the glass and talking to him through the phone, Gonzalez-Miranda has managed to make the best of such a traumatic experience. He said he used his time at Yuba County Jail as inspiration for his future artwork.

“Just being [at the detention center] allows for a little introspection, time to reflect on yourself, etc.,” Gonzalez-Miranda said. “It’s not something that I would have liked to have been a part of, but in some ways it served a purpose and allowed a space for reflection and give me a chance to work on things that I wouldn’t have been able to do. That aspect created a lot of ideas.”

Garcia and Gonzalez-Miranda have both been active with extracurricular activities on campus and have known each other for a few years. Garcia said the way Gonzalez-Miranda used his time at Yuba County to inspire his art and himself accurately represents the person that they have known for all those years.

“When I went visited him and made eye contact with him for the first time, he smiled and waved,” Garcia said. “His energy was still the same Miguel that I’ve always known and I feel like that’s very much a testament to the resiliency and the power of his spirit.”