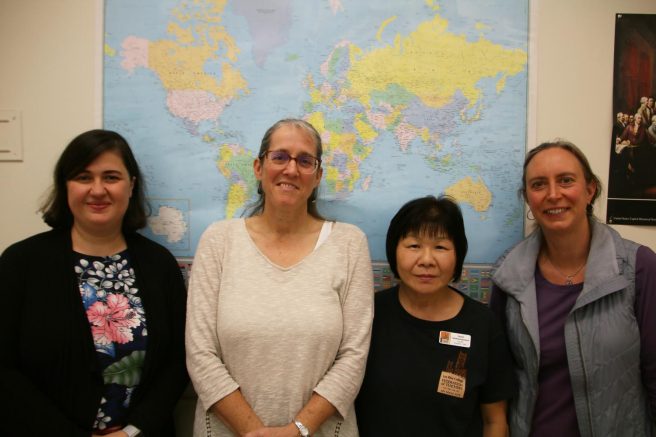 American River College ESL professors (from left to right) Sanda Valcu, Allyson Joye, Oranit Limmaneeprasert and Caterina Falli asked for a new tool to help place ESL students in the correct english classes at the the Board of Governors meeting on Nov. 18. The current placement took expires in 2020. (Photo by Jack Harris)

“Most of our students are immigrants and refugees who have gone through hell to get here, and I think the least they can have is some kind of accurate placement, so that they can be successful.”

That’s what Oranit Limmaneeprasert had to say at the Los Rios Community College Board of Trustees meeting on Oct. 16 as fellow American River College English as a Second Language professors Sanda Valcu and Allyson Joye stood alongside her.

Limmaneeprasert, Valcu and Joye attended the meeting to speak to trustee Pamela Haynes, but not for her position on the Board of Trustees. Haynes is also the vice president of the Board of Governors, which regulates student placement measures for community colleges. The three ESL professors said they feel that California State Assembly Bill 705 presented new challenges for placing ESL students, and are turning to the Board of Governors for a solution.

AB 705 took effect in 2018 and sought to reform many aspects of the California community college system, according to the bill.

The bill states that AB 705 ”would require a community college district or college to maximize the probability that the student will enter and complete transfer-level coursework in English and mathematics within a one-year timeframe.”

AB 705 also gives power to the Board of Governors to regulate the measures community colleges take to place students.

In practice, AB 705 eliminated placement tests for English and math and instead let incoming students report their high school GPAs and the grades they got in their highest English and math classes, according to the “What is the Law” page of the website “AB 705: The Law & Your Rights.”

Limmneeprasert said that for students coming straight out of high school, especially those looking to transfer in a timely manner, this proved quite effective, but that not everyone finds the bill ideal.

Many ESL students don’t speak enough English to know what self-placement is asking of them, or come from countries whose education systems operate differently than the four-point US GPA system, according to Limmaneeprasert.

“Please at least give them a chance to be placed in the right class. They don’t have GPAs from high schools, they don’t even have documents because some of them just fled their countries,” Limmaneeprasert said at the meeting.

The ESL portion of AB 705 is different from the rest of the bill in that community colleges are given three years to get ESL students to transfer-level, when it is otherwise one year, according to Limmaneeprasert.

“[The ESL faculty] lobbied and we advocated to say ‘Hey, ESL students are not basic skills students,’” Limmaneeprasert said. “We wanted to say ESL should be exempt, period. [AB 705] is not about ESL students, but we were not able to, so we were able to get to ESL students [to] have three years.”

Assessments have been the linchpin of ESL placement for some time. At ARC, the ESL department has used a combination of a placement test called ACCUPLACER, and a writing sample written by all ESL students, which are then are reviewed by ESL faculty, according to Limmaneeprasert and Valcu. Their permission to use this method expires spring 2020, and they must be in full compliance with AB 705 by fall 2020.

Joye has been put in charge of determining the future of assessments and placements for the ESL department at ARC. Joye is pushing for a different assessment, as their permission to use ACCUPLACER is going to expire next year. She says she’s been met with support within the Los Rios Community College District.

“[ARC President] Thomas Greene has been very supportive, so for our department at our college, we feel like they’re behind us in the idea that we want to have an assessment test,” Joye said. “The ESL departments at the other colleges in our district are also supportive of that idea.”

The California Community Colleges Chancellor’s Office (CCCCO), which plays an essential role in the execution of AB 705 has recently indicated an openness to using an assessment in the future.

In a Sept. 26 memorandum from the CCCCO titled “Credit English as a Second Language Guidance,” the CCCCO said it will look into assessments as an element of ESL placement.

The memorandum states that “the AB 705 ESL Advisory Committee will work with the Chancellor’s Office to examine placement options for ESL programs, including the use of assessment instruments as a multiple measure.”

The memorandum also says that any changes made to current assessment services must not inhibit a college’s ability to place ESL students.

Despite the fact that the CCCCO is open to the idea of ESL placement tests and ARC administration supports the ESL department’s push for an assessment, the road to getting one approved is still unclear, according to Limmaneeprasert and Joye.

“We have been told that we can have an assessment but there is nothing in the state chancellor’s office that would give us the possibility of identifying that tool or instrument after the current instrument expires,” Limmaneeprasert said.

Joyer said she sees a solution with an assessment committee at the CCCCO.

“They were responsible for approving and revalidating different assessments,” Joyer said. “They haven’t met in five years, and so until we can get that committee up and convening and actually putting together some sort of approval process, we’re still a little bit in the dark of how this can all work.”

Joyer said that she, Limmaneeprasert and Valcu were at the Board of Trustees meeting to call Hayne’s attention to this very committee, but that given the nature of when and how they were allowed to speak, Joyer said she is unsure of Hayne’s opinion on the matter.

“She seemed receptive but there were no questions asked or answered so I don’t know what her thoughts are,” Joyer said.

Haynes told the Current that the ESL subcommittee will present new guidelines at either the Nov. 18 Board of Governors meeting, or the meeting next January, and that she is waiting to hear the subcommittee’s opinion.

“I don’t want to presuppose what their recommendations are,” Haynes said.

Limmaneeprasert, who attended the Nov. 18 meeting, says that the ESL subcommittee did not speak.

Five members of the ARC ESL department spoke during the public forum at the Nov. 18 Board of Governors meeting, according to Limmaneeprasert. Some presented letters from their students.

“All of our students said the same thing, that they think that an assessment helps them succeed faster and not waste their time,” Limmaneeprasert said.

Other professors presented facts. Limmaneeprasert said she even read some excerpts from the CCCCO’s own Sept. 26 memorandum, urging the chancellor to follow through with what they said in the memorandum.

Due to the format of the public forum, the professors were not able to receive feedback from the board, but Limmaneeprasert says she thinks that they had the board’s attention.

“An ESL student can be misplaced into English right now, and they are. We have people right now in the ESL lab who are in English 300 yet they can not make an English sentence,” Valcu said. “It’s a really hard time for our students, for our program.”

ARC’s “The Tempest” will end on May 1