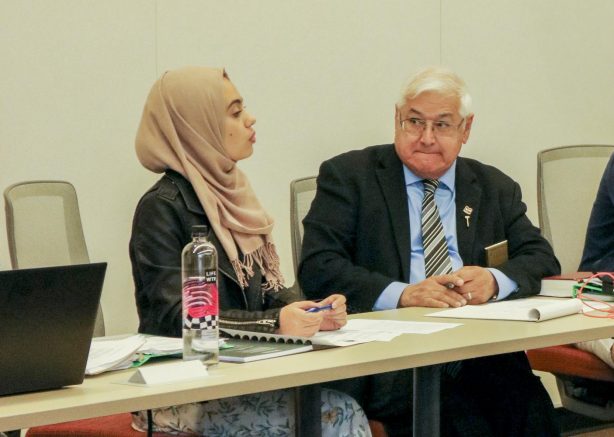 The American River College Student Senate met Oct. 4 to prepare for Undocumented Students Week and to vote on the Winter Essentials for Students Bill F19-XX, which would allocate up to $1,000 to be spent on winter essentials like blankets and socks for students.

The senate discussed how it would support Undocumented Students Week events and received comment and advice from Deborah Hernandez, a student personnel assistant with UndocuScholar. Hernandez asked that the senate show up to some of the events that will be running through the week of Oct. 14.

“I would highly encourage the senate to at least show up to the UndocuAlly training. We provide very useful information and training on terminology,” Hernandez said.

After more discussion from the senate, they agreed to support and attend the events hosted by UndocuScholar and the Club and Events Board.

The senate then voted on the Winter Essentials for Students Bill F19-XX and passed it unanimously 8-0. The bill will allocate $1,000 to support students in need of essential items for winter such as blankets, hand sanitizer, socks and chapstick.

A committee was also created by the senate in order to decide what items would be purchased for the winter essentials. Senator Feng Liu was appointed as chairperson of this committee.

Senator Alexandria Paige voiced concerns about ASB involvement and connection to the student body. Paige said she hopes that once the new ASB board settles into its roles that it can better provide for students.

“We need to be doing way more than one event once a month,” Paige said.

President Aesha Abduljabbar announced that the senate is in the process of interviewing a new student senator and will hopefully have a full board by next week.

Clarification: ASB President Aesha Abduljabbar would like to clarify that the Student Senate Board is not full, and students who are interested can still join.

Colin Bartley is in his third semester at American River College and is serving as the Opinion Editor in his second semester on the Current. Bartley is a journalism major and is working towards an associate’s degree. Bartley’s primary focus is on politics and he hopes to develop a career as a freelance journalist.