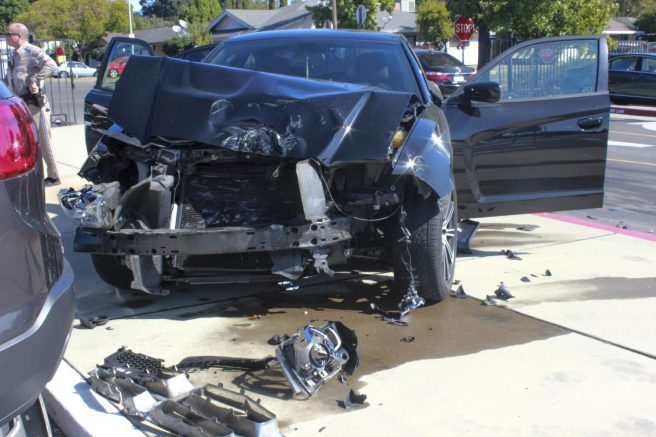 On Oct. 1, 2019, at least one student was involved in a car accident in parking lot A at American River College. Nobody was injured, according to Public Information Officer Scott Crow. (Photo by Emily Mello)

At least one American River College student was involved in a car accident in parking lot A just before 11 a.m. Wednesday.

According to ARC Public Information Officer Scott Crow, there were several vehicles involved but no one was injured.

Crow said that although Los Rios Police Department was on-scene, they could not confirm any details because the California Highway Patrol took the official report.

Social studies major Robert Nick Rouse said he was a passenger in one of the cars involved in the accident.

Rouse said his father, who was driving, was pulling into the ARC parking lot off of Myrtle Ave. when their van was hit by a black Dodge Charger, which had two other passengers in addition to the driver. 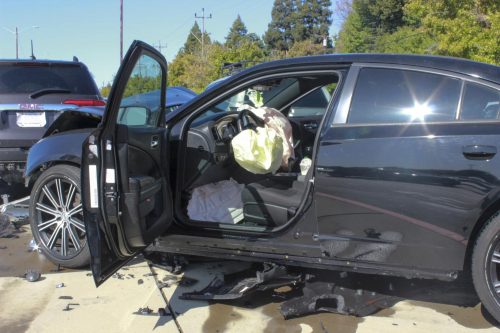 On Oct. 1, 2019, at least one student was involved in a car accident in parking lot A at American River College. Nobody was injured, according to Public Information Officer Scott Crow. (Photo by Emily Mello)

LRPD could not confirm if any of the passengers in the Dodge Charger are students at ARC.

After the first impact, the two main cars involved also hit at least two other surrounding vehicles parked in the lot.

Rouse said he wasn’t sure exactly what happened because he was reading when the accident occurred.

“We were coming in left,” Rouse said. “I don’t know if [the other driver] was trying to make a right hand turn to come in here, or if he was just trying to go past.”

Rouse also said the other driver was going fast enough to launch both vehicles into surrounding cars.

“Just based off of where we ended up, it makes me think that he was going pretty quick,” he said. 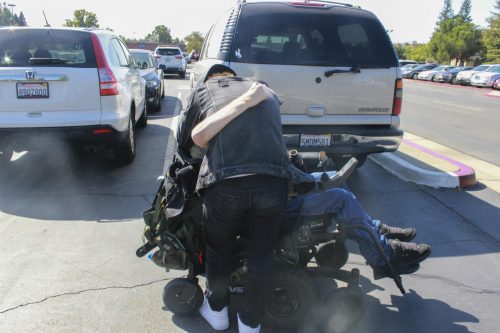 Social Studies major Robert Nick Rouse comforts the driver of the other vehicle involved in an accident in parking lot A at American River College, on Oct. 1, 2019. Rouse’s father was driving him to school when the accident happened. (Photo by Emily Mello)