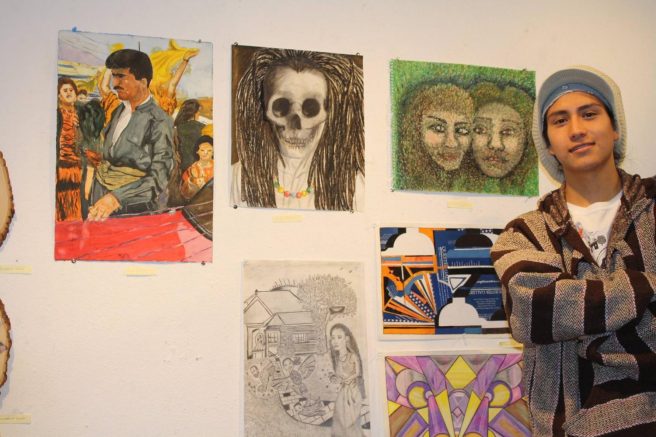 Art New Media student Miguel Gonzalez-Miranda, pictured here standing next to his works at the James Kaneko art Gallery at American River College in 2014, was detained by Immigration and Customs Enforcement agents on June, 2019. (File Photo)

American River College art student Miguel Gonzalez-Miranda’s portrait “Inner Puzzle” has sat in a narrow closet in the back of the James Kaneko Gallery since early spring.

Intended to hang in a student art show in February, the glass-framed, mixed-media collage was too heavy to hang and needed to be returned to its artist, but messages to Gonzalez-Miranda from Brad Carps, then-president of the ARC Art Club, went unanswered.

Gonzalez-Miranda’s silence continued because on June 4, he was detained by the US Immigration and Customs Enforcement. The ARC student is currently being held at the Yuba County Jail, according to the Sacramento News & Review.

Gonzalez-Miranda’s story is not unique. Throughout many states, including California, many students fear being detained or fear for those close to them who may be undocumented.

In September 2017, Donald Trump ordered to end the Deferred Action for Childhood Arrivals (DACA) program. DACA protected young adults who were brought to the US illegally as young children, also known as Dreamers. A federal judge blocked Trump’s order to end DACA, and the Supreme Court is scheduled to begin considering the fate of the program in November.

Gonzalez-Miranda is a Dreamer who immigrated from Mexico to California as a child. According to SNR, Gonzalez-Miranda was looking into obtaining U.S. citizenship last February, but his inability to pay legal fees related to a misdemeanor when he was a teen, ultimately led to his detainment.

This news came as a shock to Carps, and many others in the ARC community, as Gonzalez-Miranda was well known in many ARC and Sacramento City College circles. While Carps says he knows multiple people within his personal circles who are undocumented, he was unaware of Gonzalez-Miranda’s status.

“I know five people, including Miguel, whose immigartion status may be threatened in some way and … it’s pretty terrifying,” Carps said.

Gonzalez-Miranda’s sister Sandra Gonzalez-Miranda started a GoFundMe campaign in order to raise funds for legal expenses, as well as support for his family. Since June 21, people have donated nearly $12,000.

“Not only has Miguel contributed so much to the community,” Sandra wrote for the GoFundMe. “But he also has become a great inspiration to our family through his support and encouragement to always keep moving forward in the ups and downs of life.”

Here at ARC, feelings about Gonzalez-Miranda’s situation resurfaced in the days following his Sept. 9 birthday. Carps dragged the heavy, 24 inch by 36 inch collage out of the closet it’s been kept in for the last six months. 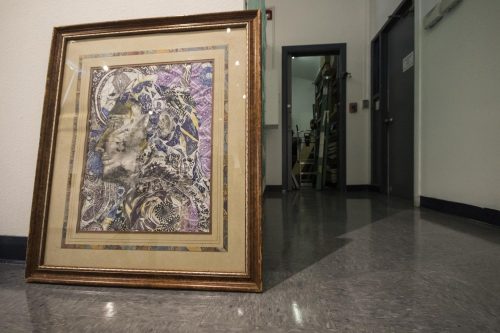 “I always admire him because he … was a very principled guy,” said Carps, who met Gonzalez-Miranda through the ARC Art Club and various art classes. “He always was very generous with his time and I think that’s a really important indicator of like really positive values.”

Patricia Wood, the director for the Kaneko Gallery and faculty advisor for the ARC Art Club, says she’s known Gonzalez-Miranda for around two years as a part of the Kaneko gallery crew and an avid Art Club member.

Wood says she’s met many people at ARC who have faced similar complexities surrounding their or their family member’s citizenship.

“I’ve met students who came here when they were two, and the rest of their siblings are documented … they know no other place except for the US,” Wood said. “It’s just really bizarre. People don’t really think of that … [they don’t] understand that history and complexity of the situations.”

Gonzalez-Mirand’s involvement around campus extended to groups and clubs that focus on undocumented communities.

Deborah Hernandez is a student personnel assistant for the UndocuScholar Resource Connection and co-founded the Undocumented and Unafraid Club while she was a student at ARC. Hernandez said Gonzalez-Miranda helped the club design posters and other artwork.

Hernandez says when she found out about Gonzalez-Miranda, her initial reaction was to jump to how they could help him and his family.

“I’m part of this community myself too. I’m a DACA recipient,” Hernandez said. “I was really, really angry and sad … but you know, with this administration, it’s really just like, not a surprise.”

According to Hernandez, the UndocuScholar program at ARC offers peer mentoring and immigration consultations, where they help students go over things like scholarships, resumes, transfer applications and DACA renewals, among other services.

Hernandez says she attempted to get Gonzalez-Miranda a letter in support of cancellation of removal, which would persuade the immigration judge to temporarily suspend Gonzalez-Miranda’s deportation so that he would be able to released on bond, but besides sharing the GoFundMe, there wasn’t much more she could do. After news that Gonzalez-Miranda had an attorney and court hearing scheduled, Hernadez says she hasn’t heard much recently. 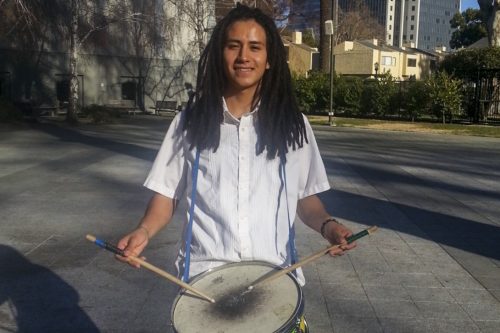 Roderic Agbunag, the Community and Diversity Center Faculty Coordinator for UNITE, says with the climate of the coming election, Gonzalez-Miranda’s situation serves as a very real fear for many ARC students.

“It’s troubling when you hear someone like in your now community, that has been picked up by ICE. Like it’s real, right?” Agbunag said. “When it’s close to home like this, I think now students, additionally to just the stresses of being a student … have to worry about ICE agents knocking on (their) door, and not maybe not affecting them directly, but maybe their parents or maybe someone that they’re close to.”

“I’d like to clearly reiterate that the Los Rios Police Department is deeply focused on the safety and well-being of our students and employees, not their immigration status,” Savidge wrote.

Savidge also emphasized that the LRPD “adheres to LRCCD Board Resolution #2017-02, which states: ‘the Los Rios Police Department should not detain, question, or arrest any individual solely on the basis of (suspected or actual) undocumented immigration status.’”

“Different federal agencies have different jurisdictions and objectives, and LRPD can help to ensure that we understand and communicate their purpose and intent,” he wrote.

The LRCCD General Council also lists procedures to follow in the event that ICE agents were to come on campus.

Hernandez said understanding your rights, even as a documented person, is a key way to protect yourself and those around you.

“There are rights that everyone has,” she said. “And if you give up those rights, sometimes that undocumented immigrant [next to you] is also forced to give up their rights as well.”

Agbunag says it’s important to stand up for those around us.

“These are our colleagues, our peers, and we need to be protective of each other and for the right causes, even though we’re not directly under scrutiny for now,” Agbunag said.

When it comes to situations like Gonzalez-Miranda’s, Wood said that it’s important to recognize that a misdemeanor isn’t a severe crime and she believes it doesn’t warrant deportation or labeling someone as a criminal.

“These people kind of get labeled as if they had some sort of criminal background,” Wood said. “And it’s really not, there’s no crime. It’s a misdemeanor. It’s [like] an unpaid ticket.”

“Sometimes the propaganda is, ‘Oh, we’re going after these killers, these rapists, these criminals.’ … I bet you thousands, if not hundreds of thousands whose immigrant status is in question, they don’t fit that description,” he said. “They’re hard-working people. They are people who give back to society, and for the benefit of our society.”

Gonzalez-Miranda’s contribution to his community is at an indefinite standstill until his fate is decided by the US immigration system.

Until then, “Inner Puzzle” will stay in the hands of the ARC Art Club, and a dusty closet in the back of the Kaneko Gallery.

Correction: This article was updated on Oct. 18 at 1:45 p.m. to correct information provided by Deborah Hernandez about Gonzalez-Miranda’s letter in support of cancellation of removal.

Be the first to comment on "Art student detained by ICE"