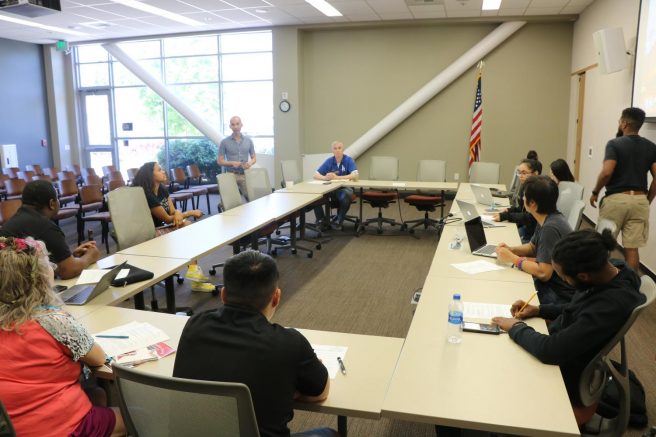 The Associated Student Body Senate spoke about the success of the food pantry and passing funds for a Black Student Union conference on April 26, 2019. (Photo by Anthony Barnes)

The American River College Associated Student Body passed two bills on April 26 covering expenses for an end of the year celebration for ASB and funding for a Black Student Union diversity conference that will cater towards prospective students from nearby high schools.

The senate meeting also discussed record-breaking numbers for ARC’s food pantry, as well as proposals that would acknowledge Native American tribes that once occupied the space where ARC sits today.

The Student Senate passed bill SB19-XX, which allocates $3,000 for an end of the year mixer event for members of ASB. President Rebecca Rico-Chavez talked about the ceremony which will acknowledge the Club and Events Board members, as well as students involved in campus activities.

“The reason for the ceremony is so we can swear in the incoming officers, but more importantly it is to recognize the students that have been super active and involved outside of the Associated Student Body,” Rico-Chavez said.

“We broke the record for most students ever served. Four hundred and thirty eight students were served on Wednesday,” Sawyer said. “For those of you that came out, thanks for coming out, the pantry keeps growing.”

ASB also discussed bill S19-08 to pay for a BSU conference that welcomes prospective ARC students. The bill will allow for up to $2,000 to be provided for the event.

According to an email sent out to faculty by the Native American Resource Center, the Miwok and Maidu tribes once occupied the land that ARC currently sits on.

A resolution was proposed regarding the recognition of Native American tribes that previously occupied the land. The bill would require an official statement to be read before every ASB meeting and also would require acknowledgement throughout the ARC campus.

The Native American Statement resolution will be discussed in greater detail at future ASB meetings once it becomes an official resolution.

Members of the Institutional Equity Project Plan team were also present at the meeting to share their plans at ARC.

“The goal was to look at what equity means here at ARC and how can we create a 3-to-5 year plan of how we can address improving campus climate, looking at equity specifically for disproportionately impacted populations,” Moon Johnson said.

ASB begins the semester with only four members