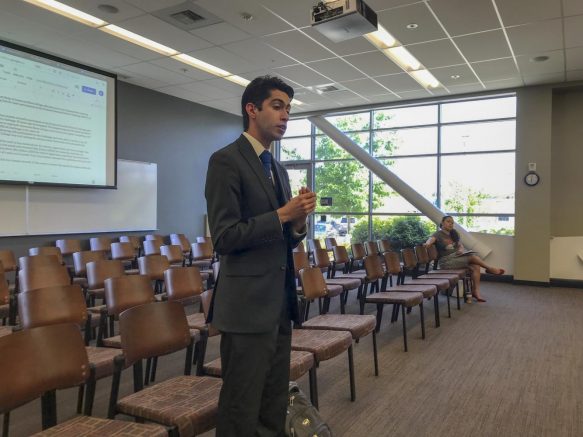 Secretary of the American River College Engineering Club, Jesbaam Sanchez advocates for a $2,500 grant at the Associated Student Body board meeting on behalf of the club on May 3, 2019.

As the end of the spring semester approaches, the American River College Associated Student Body held its second-to-last meeting on May 3. Discussions in this meeting included the urge for all Student Senate officers to finish the semester strong, a $2,500 grant request from the Engineering Club and the adoption of the Native American Statement Resolution.

Secretary of the ARC Engineering Club, Jesbaam Sanchez, attended the meeting on behalf of the club to inform the senate officers on why the club is asking for a $2,500 grant. Sanchez said the grant would go towards the clubs participation in a competition scheduled for next year, along with one of the clubs’ projects that they are planning to continue.

“My reasoning for having this bill will actually help benefit us overall, most importantly, because we actually have not received funding at all from the school or even allocations from sponsorships,” Sanchez said. “Most of our funding was actually out of pocket.”

With three of three in favor, the committee approved the bill for the Engineering Club funding.

The board also discussed the Indigenous Land Statement, which acknowledges that the land ARC is located on was once owned by Native Americans. This statement was released by the Native American Resource Center at ARC and recognizes the importance that Native Americans have had in previous and present generations.

With the Native American Statement Resolution proposed, the board asked for training that would explain the need for the statement and also has hopes of implementing the Indigenous Land Statement at more campus-wide events, encouraging professors to add it to their class syllabi and/or read the statement in class, as well as have the student senate board read it at future meetings.

The resolution was adopted during this meeting.

Student Senate President Rebeca Rico-Chavez reminded the board that there is one meeting left and encouraged the board to end the semester strong.

“I know we’re almost reaching the end of the semester, so if you haven’t been doing your office hours, you can still have a strong end to the semester. Just two more office hours and you can end strong,” Rico-Chavez said.

The last ASB meeting of the semester is May 10.