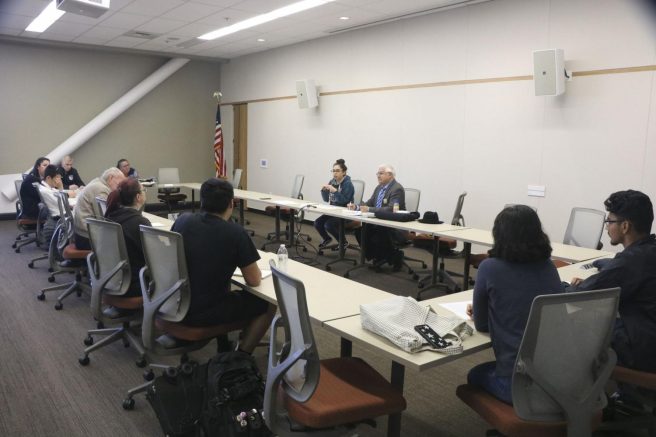 The Associated Student Body Clubs and Events Board met Oct. 30 to announce event dates, take reports from clubs, and to encourage club representatives to participate on the meeting agendas.

The CAEB meeting began with the announcement of Club Day by Student Senate President Rebeca Rico-Chavez.

“I will be giving a report to club member representatives regarding Club Day, which is on November 15,” Rico-Chavez said.

After announcing the date, Rico-Chavez also discussed more about the Club Day events and programs. It will feature food, competitions and dance performances.

The board also discussed the need for club participation, the location of Club Day and the making of stages for the performers.

Rico-Chavez moved the agenda forward by asking for reports from club representatives.

Tina Hardoin, a business and accounting major, is a representative for the National Alliance on Mental Illness (NAMI) student group on campus. The NAMI club helps students with mental health issues by inaugurating different programs.

Hardoin spoke at the meeting and gave reports about her club’s activity.

“NAMI on Campus, with cooperation of Federation of Teachers, started a connection and support group here in campus for those who has mental health issue,” Hardoin said. “[T]here will be a couple facilitators providing help. It’s going [to be] on Wednesdays 5:45 p.m. to 6:45 p.m. for one hour in the library.”

The agenda then moved forward to the public comments, but because there was no one from the public to comment, Parliamentarian Lorenzo Cuesta finished the meeting with suggestions for the club representatives.

“I want to encourage you to do several things as part of your meeting,” Cuesta said. “First of all, you guys speak up. You are leaders, you have to speak up.”

He also encouraged that the agenda is posted properly in particular time, so that there is plenty of time to work on the agenda.

Cuesta closed the meeting by showing the club representatives their rights and encouraged them to be more active by adding ideas to the agendas.

Be the first to comment on "CAEB plans for Club Day"