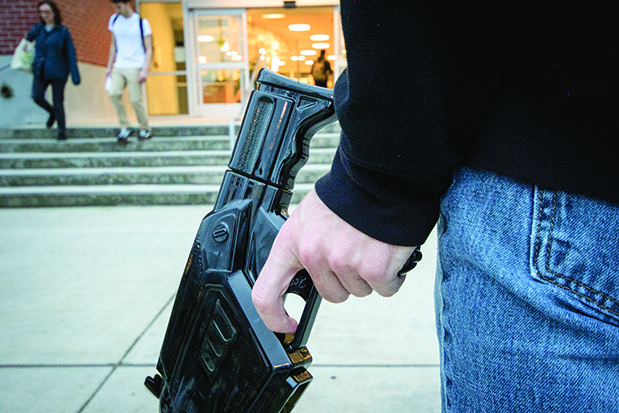 After the shooting in Parkland, Florida that left 17 people dead, American River College officials are re-examining many of their secuirty protocols. (Photo Illustration by Ashley Hayes-Stone)

Parkland, Florida became home to one of the world’s deadliest school massacres when Marjory Stoneman Douglas High School was victim to a mass shooting on Feb. 14

That same day, apprehension spread from Florida to here at American River College, where reports of a man armed with a gun prompted a campus-wide lockdown.

Gursiman Singh was in the midst of taking a test in his statistics class in the Computer Math Complex next to the Science Department when the alerts went out.

“Everyone’s phone just started buzzing at the same time,” Singh said. “We could hear the helicopter outside but we didn’t think anything of it.”

It wasn’t until 30 minutes later when Singh had finished his test and left the class that he checked his phone.

“I saw that I had two missed calls from my girlfriend and then I saw the alerts but I had no idea what was going on,” Singh said. “I didn’t see any police or anything but I decided to go back into the room and tell them.”

It was only after Singh returned and told his professor that they were in the middle of an active lockdown that the rest of the class was made aware of the situation and the door was locked. According to Singh, the doors were unlocked for most of the lockdown.

“We just kept taking the test. Everyone was pretty calm,” Singh said.

No arrests were made in relation to the incident, but the incident has caused various departments to re-examine their safety protocols.

After a student was recently removed, and subsequently banned for the semester from the Learning Resource Center, Marsha Reske, Dean of the LRC, recognized that the facility needs to upgrade their security measure.

“He was disruptive and scaring students. We have students that are trying to study but they’re fearful,” Reske said. “We’re looking at potentially installing cameras near the entryway and potentially other places around the LRC, to improve safety.”

“Communication is really important because if we kick him out of the LRC-side of the building, he could still technically go over to [the reading and writing tutoring centers],” Reske said. “We have to be on the same page with things like this.”

But not every department on campus has the same level of communication as the LRC. While some departments are well prepared for an emergency and have had recent and effective training, others are scattered and disjointed, with each faculty member having a different idea as to what is necessary in case of an emergency on campus.

For example Jayne Overgard, a mathematics professor,  must rely on her own knowledge, if faced with an active shooter on campus.

“I would close the door and continue to lock down, I’d have my students go to the far side of the room, away from the door and get low, as low as they can be, that kind of thing. [this is] something I chose to do,” Overgard said.

Her department has had no training, leaving her actions if ever faced with an active shooter on campus purely instinct.

Other instructors, such as Katrina Worley, professor and chairperson of anthropology,  have started running through scenarios in their heads.

“I leave the door open so students can go in and out. The door is at the other end of the classroom, so it almost would mean that a student would be the one who would end up locking the door,” Worley said.

Worley says she has put considerable thought into the subject and has come to the conclusion that part of the problem is due to the design of Davies Hall, where she teaches.

Worley’s classroom is designed so the door is located in the back of the class, meaning in the case of an emergency, it would fall to a student to kick the door jam out of the way and shut the door, essentially putting that student at risk.

It’s not just the idea of an active shooter on campus that concerns Worley.

“It wasn’t designed with some of the accessibility issues in mind. We have students and faculty who are mobility impaired, who would have a hard time getting out of the building in an emergency,” Worley said.

These fears have turned the Disabled Student Program and Services into one of ARC’s most prepared departments.

Nisha Beckhorn a coordinator for DSP&S said that their office has gone through numerous training. Beckhorn credits DSP&S’s  Dean Kolleen Ostgaard who is very proactive in making sure the department is prepared for an emergency.

“Our dean is very very actively working on all of the different situations, she asks for feedback, and she schedules our trainings,” Beckhorn said.“We have already had presentations from Cheryl Sears who came in as the Director of Facilities. She was with police department before, and we are going to have another [ACE’s] training.”

These training sessions are meant to teach staff how to handle emergency situations of all kinds — especially those involving an active gunman.

“There are protocols, there are very specific protocols that have been set in place, and of course at evey training we try to confirm them,” Beckhorn said.

Interim Associate Vice President Kale Braden runs the library on campus, which is a short walk away from the science department, and has already helped set in motion changes to their emergency response protocols in response to the gunman scare on Feb. 14.

While he wasn’t on campus during the lockdown, he said his staff had been trained for the situation and handled it effectively.

Braden’s main concern came with the fact that the original Rave Alert contained little to no information.

“The very next day, we had a dean’s meeting and talked about the alert,” Braden said. “It created a dialogue that needed to be had before an actual emergency presented itself.”

Braden said that the fear of an active shooter is inescapable in today’s world.

“It’s on the mind of all of the managers and faculty,” Braden said. “Each building on [campus] is going to have different procedures though. What works for us here in the library is not going to work in every facility.

Departments like the athletics department poses a significant disadvantage when it comes to safety. Classes are spread out with many being held outdoors in open fields, where there is little to no protection in case of attack.

Kathy Sullivan-Torrez, a professor in the athletics department, say she has considered the possibility of what she would do if there were to be a lockdown.

Classes held in the gym and surrounding classrooms also hold their own risk.

“When you are in a position where people are outside, inside, in a gym, in an office and balls are flying and things are going on, there is chaos anyway in our classes, “ Sullivan-Torrez said.  “There is music thumping, it’s not like it is a quiet environment, So I think there is a lot of things that come into play over here that don’t come into play in other places.”

Many students in these classes do not have cellphones on them, leaving the responsibility on the shoulders of the professor to both obtain any information needed in the case of an emergency, and to pass it along to their students.

Creating a plan that would apply to every department on campus isn’t possible, but to Biology Professor Kathy Bradshaw, the answer does not lie in the defensive, but that protective measures should be taken to prevent an incident from occurring in the first place.

“I am certainly a proponent of training and I think it has helped schools that have had lockdowns and incidents but its just so more important for us to prevent these things,” Bradshaw  said. “We can all train ourselves on what to do, but I think as a society it is so important to try to study ways that we could prevent these things.”

Although Bradshaw says she would like to see some preventative measures taken, she also does not believe placing a gun in the classroom within the hands of a teacher, is the answer.

Be the first to comment on "Are we prepared for a school emergency?"