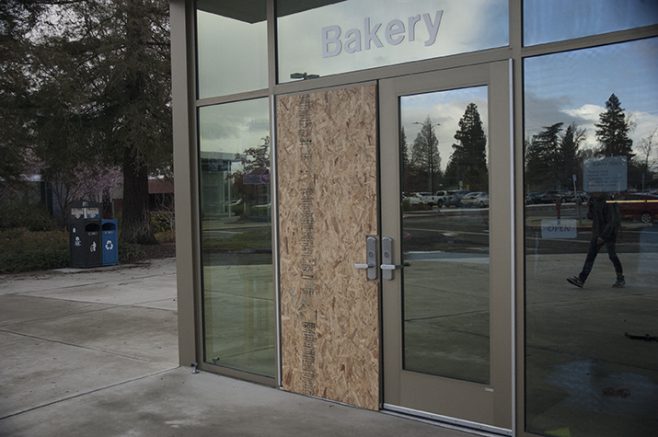 A piece of plywood covers one of the doors to the Oak Cafe on March 2 at ARC. The cafe was broken into on Feb. 24. (Photo by Brienna Edwards)

The culinary department at American River College discovered early Monday Feb. 26 that the Oak Cafe was robbed over the weekend.

“The bakery was broken into on Saturday night, February 24th.  We believe it was between 9:30 and 10 p.m.,” said Brian Knirk, the Culinary Arts & Hospitality Management department chair.

A large piece of plywood now covers one of the main doors, though no other damage is visible.

“We came in Monday at 6 a.m. and it was like this,” Veronika Yushkova, a culinary student who works at the cafe said, gesturing to the plywood covered door. “Somebody broke in, and they took our basket of chips, but they left the Funyuns, that’s all they took.”

Nothing else was stolen, despite the abundance of pricey kitchen supplies housed in the kitchen behind the cafe.

The culinary department has no previous history of vandalism said Knirk.

“We don’t know who it was, what it was,” Yushkova said.

The Oak Cafe has a security camera aimed toward the entrance capturing video footage of the event. However, Yushkova said that so far it has been unhelpful in identifying the culprit.

Yushkova said that Knirk was just as unaware of the weekend’s events as his students.

“Brian called the police; he is the manager here and he didn’t know about it and they are supposed to contact him right away when something happens,” Yushkova said.

Knirk declined to comment about his immediate interactions with the campus police.

In an email interview to the Current, ARC’s Public Information Officer Scott Crow said that the situation is still under active investigation.