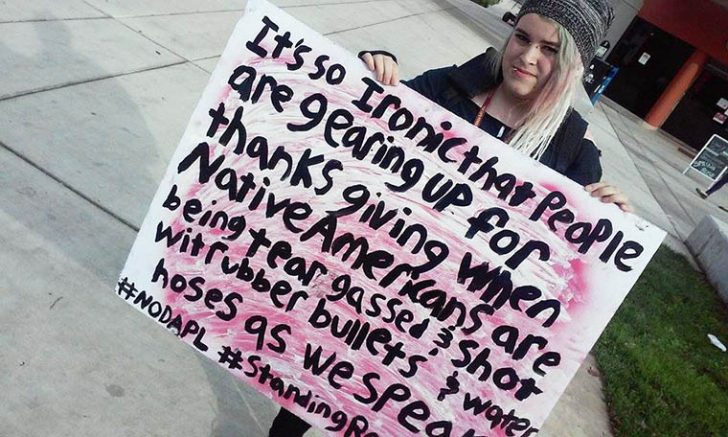 A woman who referred to herself by the first name of Alana, held a sign outside the ARC bookstore today to protest the Dakota Access Pipeline.

Protests in North Dakota near the Standing Rock Indian Reservation has drawn international attention in response to the people who are protesting the pipeline construction.

Alana, who refused to give out her last name for fear of being threatened or harmed in the future due to her protest, said her motivation was to make students aware of what is going on.

“Police had thrown a concussive grenade into the crowd and it hit her arm and blew a part of her arm…she had to get it amputated off,” Alana said about the news coverage of the pipeline protests.

“They (were) spraying down crowds at night in freezing temperatures,” Alana said.“A lot of people don’t know the extent of what’s happening and it’s the Native Americans on their own land who are being arrested and beaten by the police.”

ARC students and spectators Joe Shannahan, James Wilde, Abdul Hamid, and Dalton Douglas-Hiley had their own responses about Alana’s protest.

Alana decided to hold her protest today because she wanted to leave students with something to think about over Thanksgiving break.

Joe Shannahan reacted in support of what Alana was accomplishing as she held her sign in protest.

“She’s bringing awareness.” Shannahan said. “Keep it in your mind as you go into the holidays.”

James Wild, commenting on the protest said it was strange to see the sign, but he understood the purpose.

“Curious would be my first reaction after I read it,” said Wild. He expressed his appreciation of living in a place where we can express our opinions.

Many students who were curious about the sign, came up to Alana to talk to her and question the purpose of it.

“A few women have come up to me, and pretty much every response has been positive,” Alana said, also commenting that her protest could benefit others.

“They’ve heard something about it and then I (told) them a little bit more and they’re like ‘what?’ so I’m happy that just by saying something a few people hopefully (will) l get the bigger picture and pass on the information to someone else.”

Shannahan, along with three other men at the scene also commented to Alana’s protest.

Also commenting on the protest was Abdul Hamid, who said that “she can do whatever she wants.”

“I think it’s good people are voicing their opinions on that,” Dalton Douglas-Hiley said. “Protestors are definitely in the right.”

Although Alana’s protest was brief, by standing up and raising awareness to the event happening in North Dakota, she demonstrated that students have a voice on campus.

Alana said that although she is not a native person who is being affected by what is happening, this was not her first time protesting.

“This isn’t the only one, it’s just specific because Thanksgiving is coming up,” Alana said.

Alana said that she has protested for Gay Pride and the Anti-Trump rally’s. She plans to travel to North Dakota in the summer and offer whatever help she can.

“I’m actually heading down to North Dakota once finals are over to try to bring some supplies over to them, even though I’m (just) going for a weekend… I’m trying to donate what I can,” Alana said.