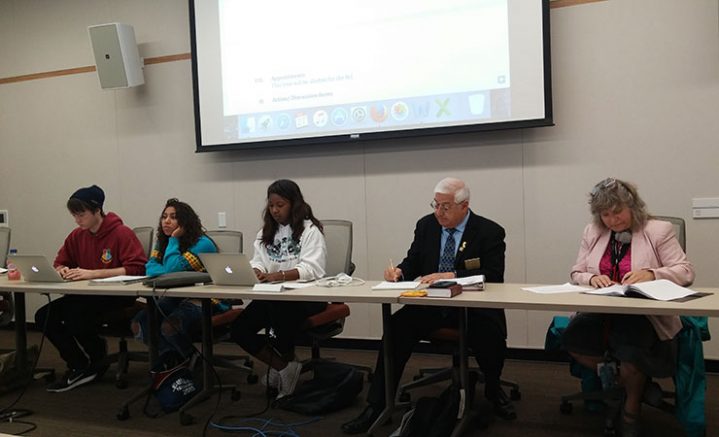 The student senate discusses the creation of a food pantry at their meeting on October 27, 2016. (Photo by John Ennis)

The student senate discussed plans to create a food pantry on campus and details for a possible Spring film festival at their meeting on Thursday.

Major Reneé Marie, ARC student and Reserve Force Officer was given the floor to share how she was affected by food insecurity with fellow students.

Last semester, Marie helped students facing food insecurity in the culinary department by providing them with food that they needed to make it through their school day.

“Can you imagine being in school to learn to deal with food and baking and be hungry?” Marie said. “I personally gave to a couple of students very quietly some money to go get what they thought was their best choice, a coffee..to maintain their energy to go to class and to drop their daughter off at the, thank goodness, childcare facility.”

In October, Marie won $100 at the Loomis Eggplant Festival Cooking Contest, which she offered to pay forward to inspire the creation of the food pantry.

“I don’t believe in a hand-out, I believe in a hand-up,” Marie said. “I believe also, that a food pantry could be an education opportunity not to shame our students, but to bring them into the process of learning about making food choices that are nutritional and sustainable for their dream to better their lives.”

CAEB president Justin Nicholson suggested that a canned food drive could be held at the next Clubs Day.

“Just an effort to collect this food and start trying to give it out,” Nicholson said. “I think doing that will pave the way for anything that comes after it because we will have already established, even so roughly as this, a metric to start this practice.”

Discussion of creating a film festival continued as Advisor Juan Blanco stressed the importance of being organized if the film festival is to become a reality.

“Next week when we take action on this, what’s important to understand… it’s the advertisement, it’s the reserving of the rooms, are there any costs associated with this, what are those costs, what technology means do we need to acquire to make this program successful, so all of those things need to be outlined,” Blanco said.

President Valencia Scott wants to make sure that a film festival is something that students would like to participate in.

“At this time I think it’s just really important to get as much student input as possible as to whether people are willing to do this or not,” Scott said. “I can bring this up to CAEB next week as well, but just you know, if you don’t feel that students would be interested then we can turn this into something else, but if you do feel that students are interested then I think it would be worth pursuing.”