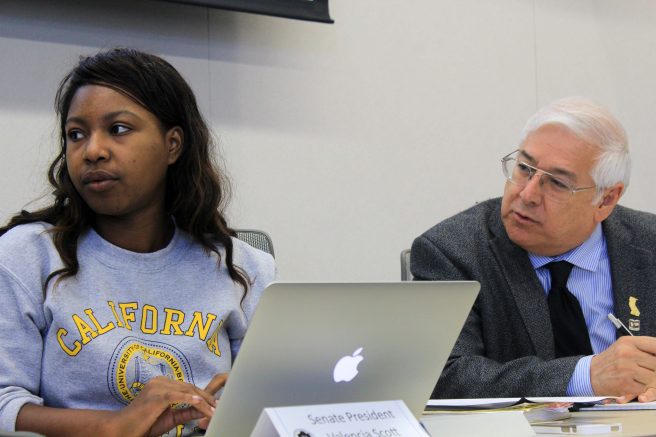 The ARC student senate added new board members and passed a bill to fund the American River Review at their meeting on Thursday.

Senator Yasmeen Baxter was sworn in early in the meeting then President Valencia Scott introduced their newest appointment, Fatemeh Mehraban, who told the board about her interest in student senate and how she would like to represent students.

“I’ve always been interested in joining student government of some sort,” Mehraban said. “I just never had the chance until college and I think it’s a great opportunity to be more involved in the community I’m apart of, as well as try to help others who may not have the time to be involved with student government.”

Mehraban said she learned about student senate from her position as a CAEB officer for the Model United Nations Club.

“I think I would do a good job of representing a good portion of the campus,” Mehraban said.

After a quick vote, Mehraban was unanimously appointed to the Senate and will be sworn in at next week’s meeting.

Later in the meeting, the board debated about the amount of money that they could spare to fund the American River Review and the importance of using the funds to provide assistance to campus programs.

“I would like to express my feeling that I would be more comfortable if we only donated $500,” Director of Finance Kevin Phan said.

“Personally, having seen our fiscal responsibility from years past, doing something like this is more beneficial to student body than anything else we’ve done,” CAEB president Justin Nicholson said. “And we like to sit here and say we have $7,000. We can only allocate so much of it, but if we sit on this pot of money and we don’t use it, what value does it actually have to the students? It has none.”

Senator Laurie Jones moved to approve Bill F16-09 which was approved by a vote of five to two.

The board then discussed plans to possibly host a campus-wide film festival next semester and how to raise student awareness of the festival ahead of time.

“Just looking at the logistics of planning it, getting space, getting involvement, making students aware, we need marketing in the back end that will definitely start this semester, but the event in its entirety would take place during the Spring, ideally,” President Scott said.

Be the first to comment on "Senate allocates $1,000 to the American River Review"