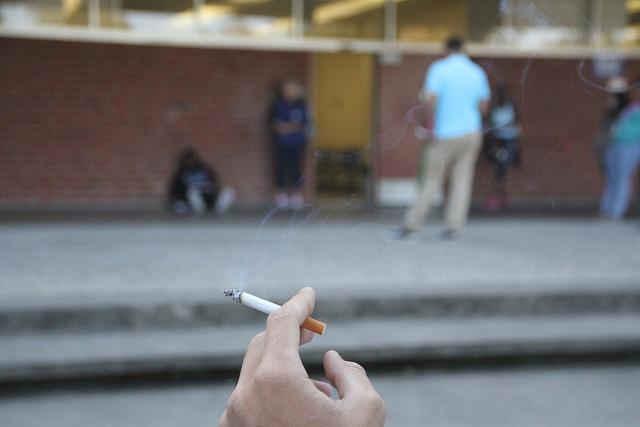 Gov. Jerry Brown signed a bill Wednesday raising the legal smoking age in California from 18 to 21. The bill will take effect on June 9. (File Photo)

By Robert Hansen and Claire Bathory

Gov. Jerry Brown signed a bill on Wednesday that will  raise the legal smoking age limit in California from 18 to 21.

The bill also prohibits the sale or use of electronic cigarettes for anyone under 21 and will take effect on June 9.

The legal age to buy medical marijuana is still 18.

American River College Associated Student Body Student Senate president David Hylton said he use to smoke for about ten years and doesn’t understand why the state would raise the smoking age limit.

“The war on smoking has reduced the taxes that go towards schools,” Hylton said in an email. “This now reduces that further.”

“If people want it, they will find it,” Hylton said. “Take alcohol, how many drank before they were 21? I think there are better ways to combat the issue.”

ARC Sen. Laurie Jones has never smoked and praised the bill for its aim at protecting teenagers from smoking.

“I’d say it’s a good thing to protect health,” Jones said. “It would also be a civic health and economic good because we all pay for the health care from the effects of any addiction.”

Jones also agrees with Hylton that the law won’t prevent people from smoking.

“Just as the current law does not prevent them from drinking alcohol, but it would make it more difficult,” Jones said. “And it makes a public statement.”

“We obviously can continue to take feedback as far as what programs we can be offering, in what ways can we help students,” Crow said. “But I know that it’s district wide as well since all colleges are confronting the same issues starting in the fall.”

Crow added that the bill won’t affect what the school had already been doing.

“At this point, we’re going to continue doing what we were doing, which is reaching out to folks … and having our ears open to see if we need additional programs,” Crow said. “We’ve spoken to health services several times and they say that they’re responding to requests as they come in.”

ARC became a smoke, tobacco and vapor-free campus on Jan 1 of this year.