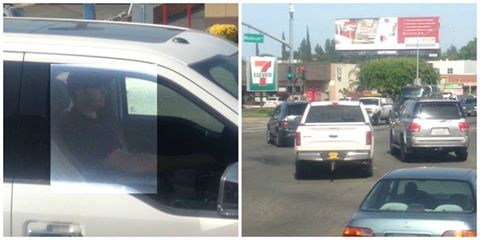 The Sacramento County Sheriff’s Department is on the lookout for a suspect wanted for indecent exposure in an incident that occurred on April 20 near the American River College campus.

According to a press release from the sheriff’s department, the male suspect yelled at a female who was stopped in traffic near the intersection of Madison Avenue and Auburn Boulevard to get her attention before exposing himself to her after she looked over to acknowledge him.

The accuser, identified by KCRA as Jezebel Sannino, described the incident in an interview with KCRA.

“He yelled out ‘Hey driver!’ When I looked over, he had his pants down – he had his penis in his hands,” Sannino said to KCRA.

According to the sheriff’s department, “the suspect is described as a white male adult, 33 to 37 years old, 5-foot-10 inches to six feet tall, with a muscular build, wearing a dark polo shirt, khaki pants, and a dark baseball hat. The suspect was driving a white 2015/2016 Ford F-150 XLT/Lariot truck with panoramic roof, a two hitch, and ‘Future Ford Sacramento’ paper plates.”

The Sheriff’s Department is asking that anyone with information on the suspect to contact the department at sacsheriff.com or by calling 916-874-8477.