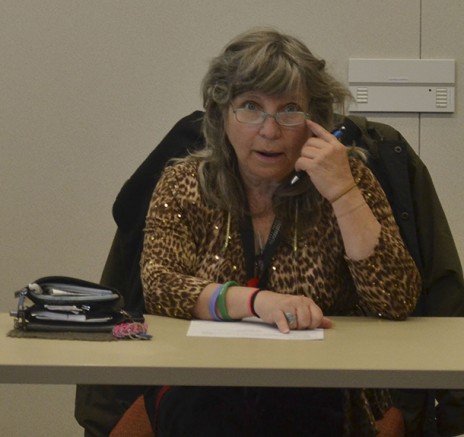 CAEB whip, Laurie Jones, motions to approve Bill S16-14, the "End of the Year Celebration Funding Bill". The bill was one of two passed during the meeting, which lasted only 15 minutes.. (Photo by Sharriyona Platt)

The Clubs and Events Board meeting adjourned after 15 minutes Tuesday after two bills were passed and the re-election of the president and vice president was affirmed.

All four votes were passed by unanimous decision.

CAEB whip Laurie Jones said afterward that “it was the shortest meeting on record” and that other CAEB meetings tended to drag on.

“Our meeting was short particularly because the clubs and the board are beginning to wind down for the semester,” CAEB vice president Mary Stedman said in an email.

“We’ve already done all the Club Days for this year, the last one being the Kaleidoscope Games, and we’re heading towards the end of the semester so we don’t want to introduce a bunch of new business,” Stedman said. “Our business usually consists of planning and throwing up events, but since we’re reaching the end of the school year, the only event we have left to plan for is The End-of-the-Year Celebration.”

President Justin Nicholson and Vice President Mary Stedman were re-elected without any debate and will continue to serve on CAEB.

“Justin and Mary have done a very good job on the board so far, and I think there’s no reason they shouldn’t retain their positions,” said James Cortright, CAEB director of finance.

Cortright added that the nature of the college, as typically a two-year institution, made it pertinent to keep successful leaders in position to make as much change as possible in the time that they have.

“There’s a big lack of institutional memory on campus,” Cortright said. “Especially since it’s a community college, so you only have two years to figure out what you’re doing.

“I think it’s really beneficial to have our leaders re-elected and maintain their positions, especially when they’ve done such a good job so far,” he continued.

Though Stedman is confident in serving another term, she sees it at her last.

“As much as I’ve enjoyed my time serving as Vice President, at this time I don’t plan on running for a third go at this,” Stedman said. “I think getting to be Vice President twice in a row is good enough.”

Trump lays out key points during his speech in Sacramento