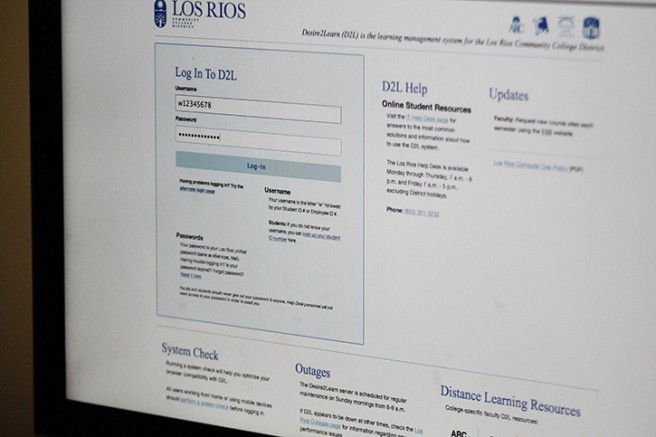 The Los Rios Community College District may soon switch from the currently in place D2L to a different program called Canvas. D2L currently costs the district $287,000 to operate each year. (Photo by Matthew Peirson)

The Los Rios Community College District is leaving D2L behind in favor of a system called Canvas, according to an email from district Deputy Chancellor Sue Lorimer.

The change comes about as a result of the LRCCD’s move to shift its learning management system (LMS) away from D2L.

The licensing for D2L costs the district $278,000 per year, but through the California Community Colleges Online Education Initiative (OEI) program, LRCCD could license Canvas for free for “at least several years,” according to Lorimer’s email.

Canvas is a LMS currently used by many of the 113 California community colleges, including Foothill College and nearby Sierra College.

If the switch is confirmed, Los Rios will begin enrolling students in Canvas in the spring of 2017. The switch will be completed by December 2017, at which point D2L will be discontinued.

Part of the reasoning behind the switch comes from a push to make online classes more accessible to Los Rios students.

Currently, Los Rios online classes are run through D2L, and some students are unhappy with the system.

American River College student Courtney Farrow said she finds D2L hard to use for both students and instructors.

“D2L’s not as accessible … we have ‘ask my instructor,’ but our professors would rather have us email them directly because it’s so hard to use,” Farrow said.

“For people who want online classes, it should be more accessible for them … If I’m going to take an online class, I’d rather have it through Canvas. It’s more one to one,” Santana said.

“You’re going to get a lot more money for the budget,” Farrow said. “We need that money to put towards other things.”

The district’s LMS Work Group, which includes representatives from every campus, unanimously recommended to the district’s Academic Senates that the LRCCD join the OEI and enroll in Canvas.

The switch will be discussed by the ARC Academic Senate in upcoming meetings before the switch can take place.

The Academic Senate at ARC meets in the Student Center board room from 3p.m.  to 5 p.m. on the second and fourth Thursdays of each month.