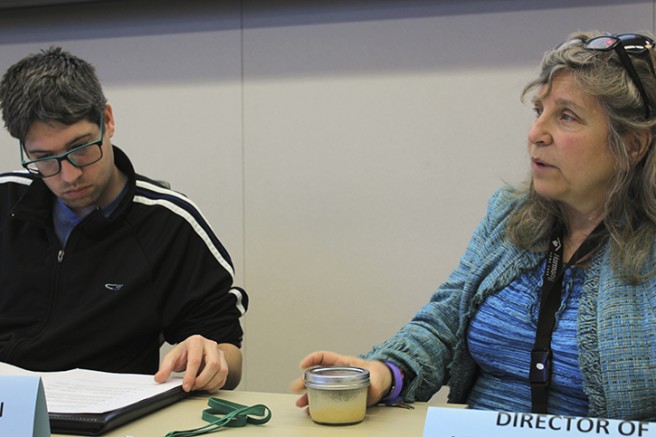 Director of Legislative Affairs Laurie Jones discusses a bill as Senate President David Hylton II reads the days agenda at the March 15 meeting. Jones introduced a resolution urging ARC and the Los Rios district to get in compliance with the Student Voter Education Act of 2003. (Photo by Robert Hansen)

A bill allocating funds for students to attend NCORE, a race and equality conference held in San Francisco, was again sent back to be revised to lower the amount at Tuesday’s Associated Student Body Student Senate meeting.

Both the Sociology Club and Progressive Democrats Club hope to use the money to support the students who are planning to attend NCORE.

At one point, the bill had an amount of $20,000 allocating funds to a select group of students.

The bill was introduced by Director of Legislative Affairs Laurie Jones with an allocation of $2,000.

“Both clubs are very small and don’t have the person power (to raise enough money),” Jones said. “The fundraising avenues on campus are very restricted and difficult and I think that racism is a critical campus issue.”

Director of Finance Jeremy Diefenbacher said that he wants to help the students attend NCORE but that funds are low.

“I think that we need to knock this number down to $500 for each club,” Diefenbacher said. “I do agree that these issues should be addressed on campus, but I think that $1,000 per club is too much money.”

“I remember you (Jones) said you were going to rewrite it and it was going to be for a thousand dollars, then it came back as $20,000 and now it’s $2,000 again,” Diefenbacher said.

“I have to stress that we cannot liquidate this account,” Diefenbacher said. “We have elections coming up, we have the end of the year coming up and we have to prepare for next semester … It’s not a feasible amount of money.”

Sen. James Cortright, a proponent for spending $2,000, questioned what else was there to spend the money on.

“If we don’t pass this bill, what other bills do we still have on planning in the next two months that are going to liquidate that account?” Cortright said. “We’re getting pretty close to the end of the year.”

Clubs and Events Board President Justin Nicholson explained the importance of using discretion with these funds.

“I feel like we could affect change for race and diversity with this money, on this campus for more people,” Nicholson said. “We could spend this money on campus and provide something, anything for students here.”

The bill will be presented again at the Senate meeting following spring break.

A resolution urging ARC and the Los Rios Community College District administration to get into legal compliance with the Student Voter Education Act of 2003 was also introduced at the meeting by Jones.

According to the resolution, the Secretary of State’s office found that only 0.3 percent of the total students served by public colleges and universities in California were registered through online voter registration opportunities they were provided.

According to Jones, ARC was to be in compliance with the educational code in 2010, so the Senate urged prompt action.