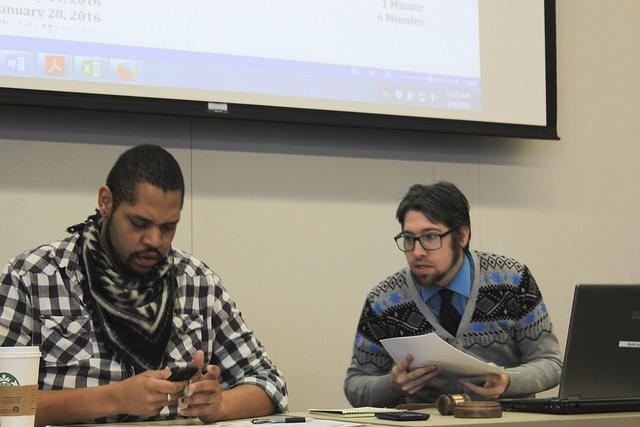 The Presidential nominees are debating and campaigning around the country, and soon the U.S. will have a new commander in chief.

There are still several candidates in the race, and while the ASB’s Clubs and Events Board and Student Senate does not endorse any particular candidate, many of the members of the Senate and CAEB are “feeling the Bern.”

“Compared to Hillary Clinton, it’s trustworthiness and I think he’s more down to Earth,” Hylton said.

Much of what Sanders has been saying about reforming the economy, criminal justice reform and ensuring college for all Americans has resonated with Hylton.

“I agree on increasing the minimum wage although I don’t agree on setting it at $15,” Hylton said. “I think it should be a liveable wage.”

Hylton added that he likes Sanders’ message regarding the criminal justice system.

“His criminal justice reform speaks a lot to me,” Hylton said. “We have a lot of low-level criminals who go to prison and become institutionalized and then they get out and have no training and can’t get a job.”

Director of Finance Jeremy Diefenbacher said “I am feeling the Bern, go Bernie.”

Not all students at ARC have decided who to support for President.

ARC student Andrew Lafleur doesn’t know who he is voting for, but as a Republican he is worried by Donald Trump.

“He’s a little extreme,” Lafleur said. “The whole wall thing. I’m not a big fan of how he just blatantly attacks people to make himself look better.”

“I would probably wind up just not voting if Trump is the nominee,” Lafleur said.

Burak Kocal, an ARC student and registered Democrat, wants to be more informed before supporting a nominee.

“I have not made my decision yet,” Kocal said. “I’m doing more of my research to see who’s the best candidate.”

Kocal said that transparency is something that could weigh heaviest on whom to support.

Be the first to comment on "Students say who they want for U.S. President"